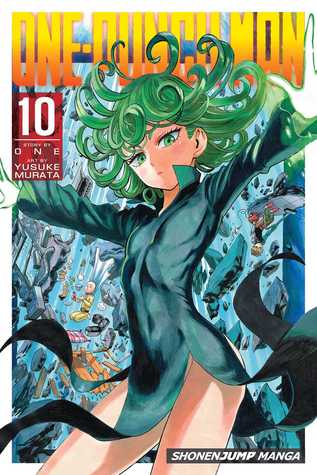 Haha, this manga gets better every time, though I have to say the Garo-less parts were the best. I am just getting annoyed with this guy.

Normally boss monsters get hit, killed, and their arc ends, pretty fast. However this time we are still with Garo and I think the next volume will also be about him. Meh. We do learn a bit more about him, but frankly I just couldn’t care about him at all. I did have a laugh when he encountered Saitama, I do hope that means we will have a grand battle that, in Saitama One Punch fashion, will end quickly. Then again, I can see it happen that he again doesn’t get the credit.
Still I hope that this Garo arc stuff will be over soon, I can’t wait.

There are also a couple of new monsters, we have a fun competition (and what Saitama did there was really kind and friendly of him), Saitama also tries to get into a martial arts competition (did he really think that wig was all he needed snorts), and I also had a laugh at that competition that Miss Blizzard set up. She didn’t expect that one, but when I saw it, I just laughed so hard. Oh my. 😛
I also loved seeing the day in Miss Tornado’s life. Sure, she is not entirely my favourite character (she is just so tsundere), but it was fun to see her being bored and just go around killing monsters, but finding none that were alive (good job a certain other character). I loved the ending to that story.

There was one part I found weird, when Child Emperor made that scanner and used it to scan heroes, eventually he came to Saitama and couldn’t read him. He said Saitama was a weakling, however, a few seconds after that he tried to read King, and he couldn’t read him, but he immediately thought that was because King was so awesome. What? Why would you dismiss one hero for another one? Then again, it is still a running gag that no one knows how much power Saitama has, and that he always gets dissed about it. I am just not sure how much I like it these days. We are now in volume 10, and the joke is definitely getting old for me. I do hope that sometime soon they will quit with that and just acknowledge Saitama for the awesomeness he is. And with that I mean everyone. The people Saitama saves, the heroes, the organisation. Everyone. He just does so much good in the world but never hears a peep from anyone but Genos. 😐

The art, and the details, seem to get better and better with each passing volume.

I can’t wait for the next volume to come out. Hopefully it concludes this Garo arc and we get a new fun arc to enjoy. Plus I hope we see Puri Puri Prisoner again. He is one of my favourites in the series.