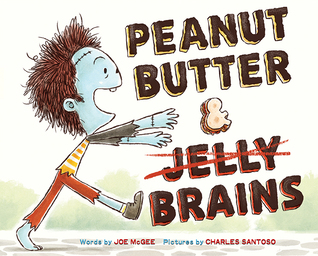 I got this cute picture book for my birthday from my boyfriend. He probably saw me drooling over it often when I checked my OMG-Need-To-Buy Shelf. 😛

Brains! That is what standard zombie stories will tell are the main food for zombies? Right? Think again!

In this adorable book we have a zombie who just doesn’t want those silly brains, oh no, he would rather have peanut butter & jelly sandwiches (can’t imagine why, but then again that might be because of my allergies to peanuts). We see him try to find a pb&j sandwich. But his friends don’t make it easy for him.

While he just wants nommie sandwiches his friends are still convinced that brains is the way to go. Our cute little zombie MC is trying to make them reconsider. If only they could taste a sandwich. He knows for sure that he can convince them that this is just way better.

I just laughed so hard to see him try his best, only to be foiled by several things, like his horde of zombie friends who are passing by and scaring everyone, human and dogs. 😛

Of course humans aren’t happy to just freely donate their brains, and aren’t happy with the zombies. Which is totally logic, I wouldn’t want to give away my brain either.

I loved the various zombies that you could see in the crowd. Each of them was unique, and my favourite would be the zombie who (at least I think) has his mouth sewn shut and he is always carrying a sign around with a brain on it. I just laughed so hard when he showed up again.

The ending? What happened there? Terrific! I just was so happy for everyone. And then that last page. Hahaha, well I am curious to see how that endeavour will end.

The illustrations are just the most adorable. The zombies are slightly scary, but mostly I just wanted to hug them (yes, I know, bad idea, but they are just too cute).

I would really recommend this book to everyone who would love a different kind of food for a zombie. 🙂