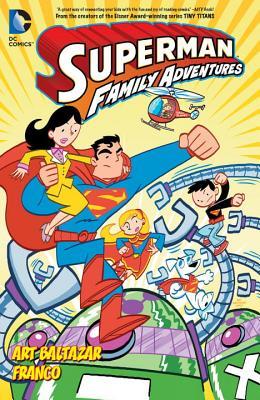 Actually read this one in Dutch. Just had too many other library books to add already, and didn’t feel like doing this one.

This was a really good comic, I was quite delighted to see it at the library. I have read more comics with the art of Franco, I just love his art and how well it fits with the superhero theme.

The book is mostly consisting of the Superman family saving the day from various baddies that everyone knows, from Luthor to Bizarro. I definitely liked those parts, but there were other parts that I liked. Lois who is slowly finding out who Superman is (duh, it isn’t that hard), Kent having to switch from his normal form to Superman without anyone knowing (which was just hilarious in this one as his boss getting angry at him and thus didn’t notice how dishevelled Kent looked), and much more.

The Teen Titans also make an appearance and I was definitely happy to see them popping up.

There was some continuity stuff that didn’t really fit (like in one comic Lois wasn’t sure who Superman was, and in the next she knew).

Of course we also see other members of the Super family, and I was happy to see them, and also the superpets. 😛 Yes, superpets. From dogs to mice.

All in all, I laughed so hard at many of the parts in this book, and thus I would recommend it highly. Hoping I can find the other books in this series too, I would love to read this one further.

Highly recommended if you are into superheroes, Superman, or need a laugh.