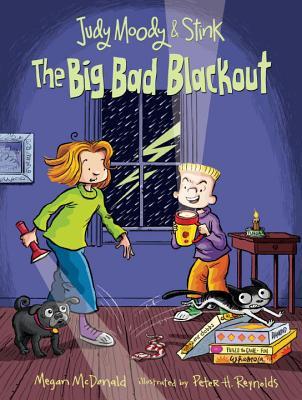 I just spotted these books, and as I could always use more Moody family in my life, I directly got them.

I picked this one first. And it was a terrific fun read about Judy and her brother and them going through a storm. I always love books about storms, we don’t have them that big here, so it is always interesting to read about them. It was fun to see how the kids first didn’t know what to do when the power went out, but then later found out all sorts of things to do. From singing songs to playing board game musical chairs (I will have to try it too, it sounds like a delight), to much more.

I also love their enthusiasm when their school closes. I never know the feeling, schools don’t close here for storms (then again we don’t have big ones) nor do they close for any other weather stuff, and if it wasn’t for books I would have thought this was normal. 😛

Of course Judy and Stink still argue at times, and I just get a bit tired of that. Yes, I get that they are brother and sister and apparently, by default, should argue or something, but I just get tired of it. Can’t we just be nice for once?

The grandma was also fun, just as the pets she has with her. Oh, and don’t forget Gert.

I had a laugh at the ending when the power came back on, and how they didn’t notice for the first few seconds. Then suddenly they had energy for 1000 people and I just laughed some more.

I would have liked to see how the neighbourhood looked after the storm, see some more about the aftereffects. We get so much information about the storm, and that he is doing damage, but then it is just all like it never was around at the end.

The book is also full of illustrations, the same ones from the original Judy Moody series and I was happy to see them. Since I have an ereader I can’t comment on the all colours that they are supposed to have. 😛 Come back when ereaders have the ability to show colours.

The book also has tips at the end, and I quite like that they were added.

All in all, this was a fun first book, and I can’t wait to read the rest of the books that I found from this series.