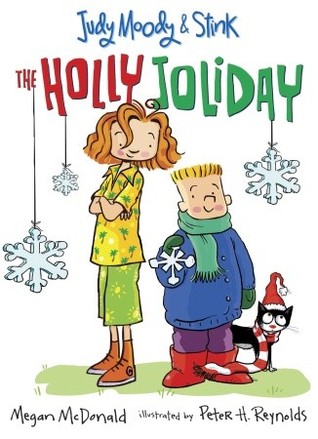 The third book, and this time it is Christmas! Will it bring snow, or will it be a typical winter for where our duo lives?

I have to say that I feel sorry for Stink, I know the feeling of wanting snow for Christmas. Judy is more like my boyfriend, he doesn’t particularly want it. 😛 So I was on Stink’s side this time, though I have to say I also liked Judy and what she did (Hawaiian party plus some songs). But I mostly just wanted the snow to fall. It doesn’t happen here that often, OK, if ever, that snow falls on or around Christmas.

We also have Jack Frost, though I just guess it was the mailman. Unless the author suddenly decided to add a magical element to the mix, but that would be a bit weird considering she never did that in any of her other books.

We also have a holiday show, and I have to say that I didn’t like what Stink did in that one. I do hope that he did get some sort of punishment, otherwise I can just see that everyone is going to copy him when they are boohooing about their role.
I did love Judy’s show, especially the parrot part.

I had a snicker at the fact that Judy just made her wishlist on toilet paper. I wonder why her parents didn’t tell her to just keep it to x number of presents. And not write down all the stuff in the entire world.

Oh, and I just noticed, but with the events in the book the title suddenly makes much more sense, and I appreciate it more!

All in all, a very Christmassy book, not exactly the right time any more, but who knows, maybe in December I will be re-reading this one right in time for Christmas. And then I will hope even more for a white Christmas.

I already said what I wanted to say about the illustrations in the other book’s reviews. I love them, but I am sad that they aren’t full colour because ereaders. 😛