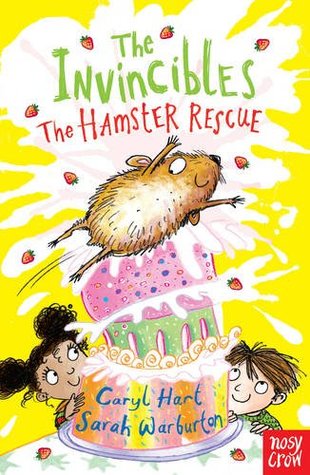 The second book in the Invincibles series. This time with hamsters, birthday parties, and friendship!

I have to say it would be nice if Goodreads had a series tracker. 😛 It was only thanks to my boyfriend’s phone not taking well to the new update, and us losing back-ups and such for many things, including for the book catalogue, that we had to re-scan all the books (we are still working on it, after 3 days and about 1 to 2 hours each day, we are almost done with one bookcase) that I found the first book and decided to check if there were any new books in the series. 😛 And there was!

I was delighted not only by the title, but also by the cover. I am big hamster lover, I got a hamster named Hakumei. So I just had to have this book. Luckily it was delivered quite fast after ordering it.

I have to say I wanted to shake Nell a little bit in this one. Why? Well, that she totally forgot her best friend’s birthday (how do you even forget that), and that instead of calling off the other party, she just went to that one. Which, I called it, turned out to be a disaster. However, thanks to a little someone it turned out to be quite a fun story to tell everyone in the end. It wasn’t that big of a surprise as the blurb made it out to be, as even I can tell you that such a thing is bound to happen if you take x with you. But still it was fun to see how the chaos spread quickly and how Nell took advantage of that.

I am still amazed that the cake made it in one piece. With the way they were running I was worried it would be all over them, and other things.

I didn’t quite like the birthday girl, nor did I like the mother. They both have some serious lessons to learn about being nice, friendly, and polite.

I had quite a laugh at Nell’s family with how the baby always ends up somewhere. Either in a box, or sprinkled on the kitchen counter. There was also the older brother who I knew wasn’t so bad, but still acted like he was totally tough and didn’t care about his little sister. Then we have a silly dad, a sweet grandma, and a scatter-brained mom who did some fun creative things.

Then there is her friend Freddie’s house which is stuffed to the brim with people. Though often the most important person isn’t there. The father. Which made me feel sorry for Freddie. But thankfully something happens at the end that was just so sweet that it brought tears to my eyes.

Considering the tales told by Nell and also other family members about her brother’s band, I am glad there is no audio in books. I wouldn’t want to hear that kind of stuff.

Of course the book is also full of fun illustrations, this time in the colour yellow. I hope this theme will continue in the next books as well. So I am quite curious about the next colour. Pink? Red? Purple? So many possibilities!

All in all, it was a delight of a story and I laughed my butt off many times. Definitely would recommend it!