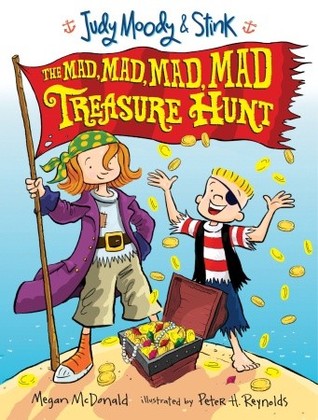 The second book (for me) in this series. This time we have pirates and treasure maps!

It was quite a fun book to read, I love pirates and treasure hunts so I was happily thinking about what the clues could be, even though I didn’t get a lot of them right as they were specific clues for their world (for instance the sign at the art shop, or the first clue). I could guess what it might be, but without knowing the island….

I didn’t quite like the Tall boy and that girl stuff. I just thought it was quite rude that they were following Judy and Stink. Then again, Stink and Judy did it back, but I can see why they would do that. I would probably have done the same if someone is stalking me like that, I would turn the roles for a bit.

I had a laugh at what all the right things to find were. I won’t tell you, as it would be spoiling, but I definitely liked the Morse code clue the most. I just feel a bit sorry for the one guarding that secret. 😛

I also did feel sorry for the parents. Woken up at ungodly hours, kids not appreciating good food. But they went along with it, and I did like them for that. Not many parents would have as much patience with their kids as these two did. Then again, that is something I have noticed in other Judy Moody’s as well. The parents are really great and do a good job at parenting.

All the pirate stuff was fun, and the dialogue was peppered with pirate talk. And of course everyone had a proper pirate name! Arrr!

Plus points go to the title, it is such a fun one, fitting perfectly with the story.

Then there are the illustrations, once again, they are good, but once again I can’t comment on their colours. I am sure it looks fabulous, and I will be buying the book so I can see those full colour illustrations.

The ending was a disappointment, it felt like the cheap way out, and after all the stuff that Judy and Stink did they deserve better. And for that I remove some of my rating.