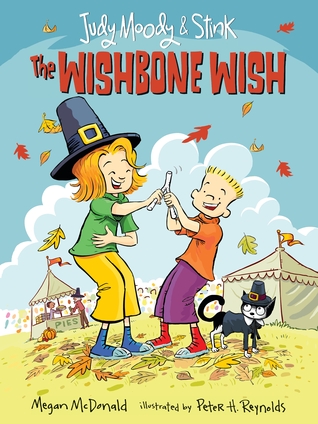 The last, and also the least liked, book that I have from this series.

On the one hand I am glad I read this one last, no disappointment or worries that I might also not like the rest of the books, but on the other hand it sucks for it to end this way.

My biggest problem was both characters and again their stupid arguments. There was a bit of the book with them arguing. Of course eventually mom intervened and stuff started to get better, but really, was it that needed? Even later they started up again. Urgh…..

Plus I also was pissed with Stink and how he did that relay race. How he knew how much it meant for his sister but then just dived face first into jell-o because he couldn’t resist. I just hated that part so much. If they had lost by way of normal losing, that is sad, but now I just wanted to kick Stink. I am already not a big fan of him, and this sort of thing doesn’t make me a bigger fan.

The turkey thing was also a disappointment. 😐 They really didn’t think that one through at the school. Give away a turkey like that, really, when do you want people to eat it then? 😐

I also felt sorry for Judy for what happened to her project. Stupid Stink.

There were some fun parts. For instance big parts of the race, a bit of the training, when they were finally acting like sweet siblings, the grandma parts.

The illustrations are great, I quite like the style. Just a shame that I can’t see them in colour.

All in all, I am very happy that I found these books and that I tried reading them. Three out of four books were great, just a shame of this one.