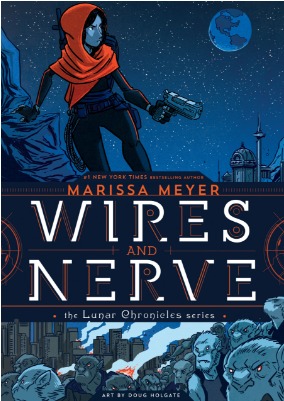 This was just AMAZING!

This is all happening after the events of the first series, so be sure to read those before reading this one or be spoiled!

When I heard that this series would be getting more books, in the form of graphic novels, I just knew I had to read them. I finally had a chance to do so today, and boyyyyyy, it was awesome. I am just a little sad about the lack of Wolf x Scarlet. We do see some glimpses of them, and those were absolutely cute, sweet, romantic, and made me want to see more of them, but they definitely don’t get much of a spotlight. Hopefully next time they do.

But luckily there is enough romance with my second favourite couple: Cress and Thorne. Ahhhhh, so much sweet romance that my eyes really turned into hearts. They are just the sweetest, and seeing them in this medium was even better as it made their interactions even more fun and lovely.

And then there is even some romance on the horizon for our android Iko! I was definitely happy with that as the whole cast from the series was coupled with someone, but Iko was left out.
Then again, as we can see with this book that wasn’t the only thing from what she is left out. Apparently no one acknowledges her as a hero, while she, like all the others, did big things to save the world (and Lunar).

Most of the book is from the POV of Iko, and I just loved it so much. Finally our sassy, fun, hilarious android gets a spotlight on her. She so deserves that. I do remember finding her slightly annoying in the books, but she is definitely better in this one and I just loved how much butt she was kicking. 😛

Yes, there is a lot of butt kicking. Our wolf guys from the series are still alive and kicking, and Cinder would love them back to Lunar, but they refuse. They cause a lot of chaos in a time that is supposed to be peaceful. Someone has to bring them back, and that is a task that Iko took upon herself, and she is darn good at it.

But of course, the baddies aren’t going without a fight, and we even have a bigger villain again. I must say that I didn’t like him one bit. He never wants to listen to kind advice, or see another viewpoint. Yes, I can understand that his life wasn’t the easiest, and that is pissed at Lunar, but really? Can’t you just give things a chance at least? rolls eyes

I loved seeing all our characters back again. And to see how they are all doing, and what they are currently doing. I did feel sorry for Cress, her immune system is truly terrible, but then again this is logical considering she spend so much time in space and not making her immune system strong.

There was just one thing I didn’t particularly like and during those times I noticed I was just zoning out a bit, and they were the parts with Cinder trying to reform Lunar. Getting rid of the royalty/queen stuff and get someone who is elected on the seat. It was just utterly boring and bland. Plus while I did think it was a good idea, it did feel a bit like she was ungrateful.

The art is also pretty good, I quite like the style, and the characters look, for most, the same as I always saw them.

All in all, I need, no I demand, the second volume of this book now! And I would highly recommend this one to everyone. Again be sure to read the series first before this one.