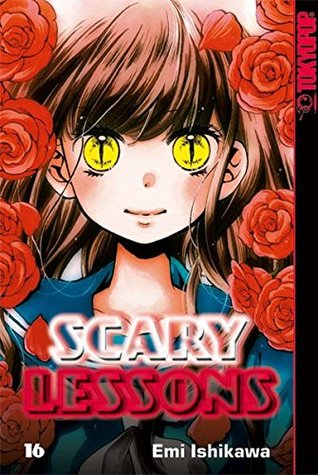 I had so much fun reading this one yesterday. Not really the best idea to read this around midnight, but eh. 😛 Still definitely worth it.

This book had a few characters I didn’t quite like, then again, that seems to be the formula for this manga. Sometimes you have characters you sympathise with, but often you just dislike them.

Hour 1: The Door to the Beyond. 3.5 stars. I would have rated it higher but Mika just annoyed the hell out of me. What a jealous bleh girl that was. OMG we are best friends, oh no that guy picked my best friend. My best friend tries to be friends with me as well and also balance with her boyfriend, but I don’t want that, because I am so sad. Boohooo. The idea of a door to the beyond and what that brings was interesting though. Also is that Yomi? Or another girl who looks exactly like her? The ending, not so surprising, but I am glad that it didn’t end in the typical ending we are so familiar with. Still a shame that Mika acted this way. Momoe was a sweet, cute girl, and she definitely deserves a better, less jealous girl as a best friend. And yes, I can understand that it might hurt that your best friend gets the man, but are you really so petty that you stand between her and a happy love life? I am glad they split this story in two parts, that definitely was a great idea, it gave the story more depth than if they had stuffed everything together.

Hour 2: The Woman With The Red Shoes. 4.5 stars. Ah man, I am so not going to wear my new red Converse All Stars shoes, which I bought for quite cheap, any more, or at least not when I am alone. 😛 This was definitely a creepy story, with yet another typical ending. Then again, I saw it coming a mile ahead. The girl was definitely a meanie. Caring about fashion, and being a bitch if someone has better things or tells her to stop. Bleh.

Hour 3: The Heavenly Chest/Crate (I am guessing they mean the refrigerator). 4 stars. This one was definitely creeeeeeeeeeepyyyyyy. I do wonder why no one ever thought to suspect that fridge though. Multiple kids disappear and they are all last seen, or mostly seen at the fridge… Sometimes I really doubt people. I did feel really sorry for the girl. 🙁 Poor thing. No one deserves that.

Hour 4: The Girl on the Poster. 4 stars. I did feel sorry for the girl. 🙁
But I didn’t like that she stole the idea from her father, that is just not done. If you can’t think of an idea just leave it, there are other competitions.
The poster was definitely creepy, how things got added (not only by our girl), and how things changed. shivers I did quite like that everyone around her saw it happen. Often when mysterious things happen only the MC notices, so this was quite a nice touch. Sure, they thought the MC did it, but I still think it counts. Plus I also liked the fact we get some background story on the drawing and how the dad came upon the idea to draw it.

Bonus Story: The woman with the red shoes. 4 stars. They really ended with a bang. This was a terrific, creepy, and a bit sad, bonus story with the same lady as we saw earlier. Poor boyfriend. 🙁 I guess he wishes he hadn’t said anything, or that he didn’t leave his girl alone.

All in all still a good volume, and I quite enjoyed it. Even if I couldn’t walk around the house without putting on all the lights. Because really, these stories are creepy!

Be aware of the lady in white when you are wearing red shoes, before you know it she will cut off your feet. Muahhaahaha.