Yes, this week is full of book blitzes and cover reveals! It is a busy week, but I am definitely happy I am getting the chance to participate and show some book love!

Today I have a fun book about witches, high school, boys, and voodoo, yes voodoo! I haven’t read or seen that many YA voodoo books, so I am quite happy that this book is coming out. I am a bit worried about the lying, and the spinning stories, but I have hope this girl will learn a lesson and become a good protagonist.

For today I have of course the standard book info + author information, but I also have two (yes, two) giveaways (yay, international) + an excerpt (a really creepy one), so I hope everyone enjoys my post!

High School can be a witch.

This book is part of the Marvelous World series published by Simon and Schuster and Random House Listening Library.

A teen girl with the ability to predict deaths through her drawings shouldn’t need to lie constantly to make her life sound interesting. But that doesn’t stop Emily from spinning stories faster than she can keep up.

After transferring to a new school, Emily’s ‘dull’ life is shaken by the appearance of a boy who seems unfazed by her far-fetched stories. A too-handsome-for-his-own-good senior, Noah has some secrets of his own. He needs Emily’s special gift to save him from Sarah, queen bee of the school’s It Girls, whose own supernatural abilities have forced him into a life of silence and solitude.

But when Emily tries to free him from Sarah’s voodoo curse, things go belly up, landing Emily on Sarah’s hit list. Soon, Emily and Noah are on a collision course with the It Girls, leading to a shocking revelation that ties them together in unimaginable ways. If their powers remain unchecked, this teenage popularity contest could spell the death of them all…

Romantically charged and eerily chilling, Something Like Voodoo weighs the choice of saving your life versus fighting for a life worth saving. This paranormal romance will put a spell on you. 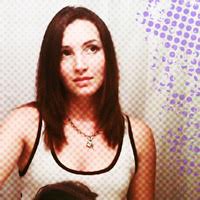 Rebecca Hamilton writes Paranormal Fantasy, Horror, and Literary Fiction. She lives in Florida with her husband and four kids, along with multiple writing personalities that range from morbid to literary. Having a child diagnosed with autism has inspired her to illuminate the world through the eyes of characters who see things differently.
Rebecca Hamilton is represented by the ever-more-amazing Rossano Trentin of TZLA.

Find her here: Twitter |||| Website ||| Facebook
Excerpt time! I had quite a few to pick from, but this one was (for me) the best one! So creepy.

We sat for a while, staring over the frozen lake. Sarah kept ruining everything. I half-expected to see her in zombie form peering at me from between the trees on the other side of the lake or something. For a moment, I would have sworn I saw something — her alter ego, the one that flashed in the window at the asylum — but it was only a shadow.

Chills prickled the hairs on my arms. I scooted next to Noah, and he wrapped his arm around me, engulfing me in his warmth. Inside him was a burning fire. That was what Sarah’s hold on him felt like. Hell.

I remembered what I read about voodoo—that black magic could only be used as revenge—then considered what Noah had said: her hold on him was stronger than on most people.

I peered up at him, one unspoken question still on my lips. One I couldn’t bear to ask.

What did you do?