Today I am revealing a beautiful, gorgeous cover. It is a bit reminiscent of the Firebird series with the two cities one at the top, the other at the bottom.
I definitely love the style and I am sure people will love this cover.

Next to the reveal of the gorgeous cover I also have an exclusive excerpt for Chapter 1 + a giveaway (sorry US only :\).

Shall we get to revealing this gorgeous cover?

It is soooo gorgeous! 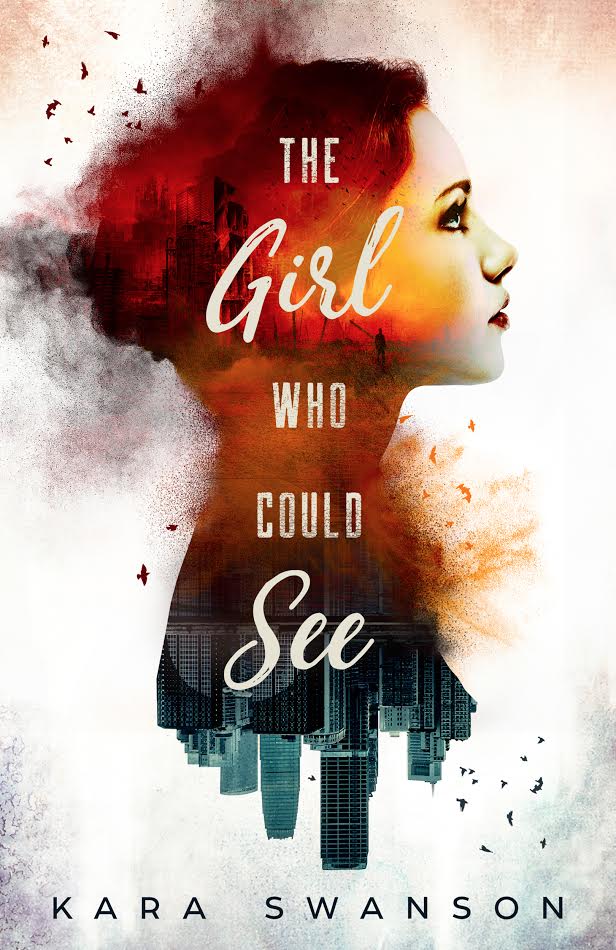 All her life Fern has been told she is blind to reality—but what if she is the only one who can truly see?
Fern Johnson is crazy. At least, that’s what the doctors have claimed since her childhood. Now nineteen, and one step away from a psych ward, Fern struggles to survive in bustling Los Angeles. Desperate to appear “normal,” she represses the young man flickering at the edge of her awareness—a blond warrior only she can see.

Tristan was Fern’s childhood imaginary hero, saving her from monsters under her bed and outside her walls. As she grew up and his secret world continued to bleed into hers, however, it only caused catastrophe. But, when the city is rocked by the unexplainable, Fern is forced to consider the possibility that this young man isn’t a hallucination after all—and that the creature who decimated his world may be coming for hers.

As the daughter of missionaries, KARA SWANSON spent sixteen years of her young life in the jungles of Papua New Guinea. Able to relate with characters dropped suddenly into a unique new world, she quickly fell in love with the speculative genre and was soon penning stories herself.
At seventeen, she independently published a fantasy novel, Pearl of Merlydia. She has since published many articles, including one in the Encounter magazine. Kara received the Mount Hermon Most Promising Teen Writer Award in 2015. You can find her on Facebook as Kara Swanson, Author, or attempting to be artistic over on Instagram (@karaswanson_author). When she’s not creating new stories and placing characters in peril, she’s probably binge-watching Marvel movies, playing with her huskies, reading till two in the morning or experimenting with a dairy-free mocha Frappuccino (skills, I’m telling you).

On television, they never tell you how cold it is.

They might show you the dimly lit room or the hard, uninviting chairs—stark reminders that you have no power here. They may depict the lonesome table separating you from the elderly agent with the stone-grey eyes. But those cop shows never depict what a chilly affair an FBI interrogation truly is. If their aim is to make this process as intimidating as possible—it’s working.

I wrap my hands around bare shoulders, fingertips far colder than the skin exposed by my red tank top. Brilliant move, Fern. Wear a scarf, but forget your jacket. Stifling a shudder, I try to meet the sharp gaze of Agent Barstow standing rigidly across from me.

“I don’t know where you’re from, miss Johnson—but in LA, state-of-the-art buildings don’t just crumble.” His voice is gravelly, matching the jagged lines of his dark skin and weathered face. “Federal buildings, no less. There one minute and the next…destroyed.”

His tone chills me even more, and I tug nervously on my scarf. His arms slowly unwind from his chest as he takes a deliberate two steps toward me. “We’ve had everyone on the disaster—CIA, local police, firemen…heck, we even called NASA. No one can find a plausible reason why a skyscraper, in excellent repair, would collapse like that. No one, that is, except you.”

I fight the urge to bolt for the door as he leans down, palms flat on the table, so close I can make out the creases on his dark suit. “You warned us of an attack in that area two weeks ago. How did you know?”

I suck in a deep breath as his voice lowers, dark fists tightening on the edge of the table. “Are you involved with a terrorist organization?”

I almost laugh at his words, at how they couldn’t be farther from the truth. I’m here to save LA, not destroy it. To save everyone. And I don’t have much time—none of us do. If I can’t gain this man’s trust, a shattered building is nothing compared to what will come next.

“No, sir.” I shove my shaking hands beneath my legs as I glimpse a pair of lucid blue eyes over the agent’s shoulder. They shouldn’t be there—and I know not to stare. But those eyes that only I can see are the reason I warned the FBI in the first place. Their owner the reason I’m even sitting in this room.

Licking my lips, I keep my attention on Barstow. I’ve wanted this for years. Someone to listen. Really listen. And it’s the FBI, no less. Be careful here.

When I open my mouth, the words are calm and steady. I hope they’re convincing—they have to be convincing. “I knew about the incident, Agent Barstow, because my friend warned me.” Throat suddenly dry, I look away. “My imaginary friend.