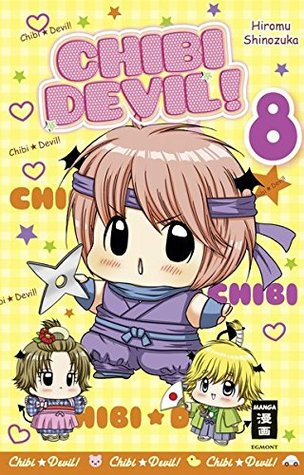 A super-adorable, sweet volume in this series! With ghosts, magical hair, and much more.

Yep, we finally meet one of my favourite characters in the series, the ghost girl in the toilet. She is so awesome, love how she can alternate between looking sweet and cute and then the next moment she is in ghost/zombie mode scaring everyone to death. I am not sure if she ever got a real name, I know Mao tried to give her a name, only to piss her off (then again, anyone would hate that name).
She pops up later again in this volume, this time to help Karin with her diet. It is quite a fun idea that she can also go out of the toilet and travel a bit. Poor Karin though. 😛

Why the sudden ghost? Well, Mao-chan is terrified of ghosts after an unfortunate event with the tv. So they go to Pepe’s family home (meet his grandparents, his girlfriend (yes, he has a girlfriend, which was hilarious not only because it was unbelievable, but also with how the director acted), and we see how close the demon world actually is (surprisingly close). The ghost is in the toilet, and guess who has to go pee, yep, Mao-chan. At first he isn’t scared, but then she does her famous creepy face, and Mao-chan doesn’t know how fast he can run. 😛 Later on he gets a whole therapy session, and it was adorable to see how normal he tried to be.

Next to this story we also have bed-wetting (eww, though it was hilarious to see that it is infectious and that all the kids get it), magical hair (I wouldn’t mind having that), a diet (Karin-chan eats too much, and she is getting bullied by her father figure over it (I am not too sure what I think about Itsuki, he does some stuff that is just a no-no)), Shin and Mao-chan day out (soooo fun to see Shin get the spotlight for once), Mao-chan reverts back to his baby form, which is what can happen to demon kids at least once (which is quite interesting, it sounds a bit like the measles). I definitely loved the Mao-chan reverts back, it was cute to see him back in baby mode, but I also had a laugh about Karin-chan in that story.

The art keeps being adorable and fitting perfectly with the story.

The only thing I would like to see is Honoka x Shin. It was featured quite a bit in the earlier books, but now it just died down. I would love to see more of them getting together, they make such a cute couple!

And now it is waiting a long time before I can get new volumes again. Maybe I shouldn’t read these so fast, but I just can’t stop myself.