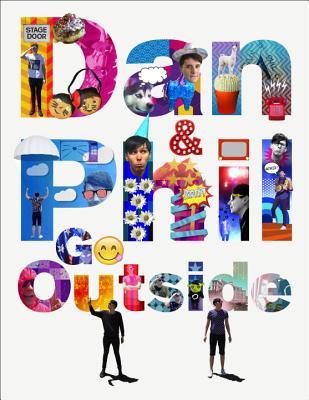 This was yet another hilarious Dan and Phil book. How fun that they went on tours, visiting all sorts of cities (though really, who drew that route for the tour? :P).

My second Dan and Phil book, and I loved it as much as I did the previous book. I still am quite clueless about the hype surrounding Dan and Phil, still haven’t watched any of their Youtube stuff, I didn’t even know they had a tour, or multiple tours, but when I saw this book at the library (which is a miracle on itself) I just had to grab it and take it with me.

I was hoping for a lot of hilarity like with the previous book (yep, lots of hilarity happened). I was curious what they would be doing outside, which turned out to be touring, but also visiting the cities where there tour stopped. I have to say I most enjoyed those parts. The tour/show parts were OK (I definitely laughed during the zombie apocalypse/earthquake talk), but I preferred seeing them walk around outside, visiting places I wish I could visit as well. Plus those squirrels. They sure have a thing with squirrels.
The tour bus parts were also perfect (my word that bus is humongous o.0), I laughed so hard at the deer incident part. Maybe this learns Phil to not have a dozen or more coffee cups while in a tour bus.

It was quite a hilarious book, though I had some trouble differentiating between who was talking, in the end I knew who was who again, but it took me several chapters, and a few back reading to get back in the groove. 😛 Same goes for the who is who again, at times, they looked quite alike so I had a hard time seeing who was Dan and who was Phil.

Poor Phil and his travel sickness. I know the feeling! Long car trips and me are not going together. I do have medicine, but it only works so much.

The book is filled to the brim with photographs, often accompanied with text, but sometimes also just pages and pages with just photographs of the show, of Phil and Dan (Dan the Master of Selfies), of the crew that is with them for the show. I did like that they added the fan stuff they got during the tour.

All in all, I would recommend this book to everyone, and I hope that Dan and Phil will write a new book, I will be sure to get it and read it.