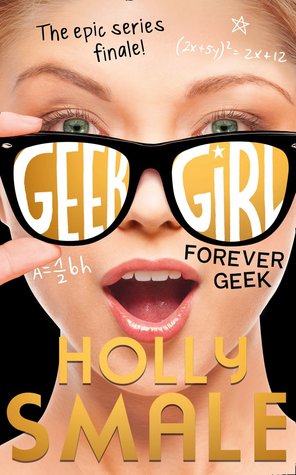 3 stars. There was an almost equal balance between good and bad. I will definitely miss this series though, Harriet might be frustrating to the max, but the modelling (whenever that happened) was good and fun, Harriet’s friends were a delight (though I had to get used to Toby), Harriet’s parents and sister were hilarious, Bunty was fantastic.

Instead of the normal review I will make a good/bad review as I am quite tired, but I still want to tell everyone what I thought about the book.

First up the good:
-Australia! I just loved that Harriet, Nat, and Bunty went to Australia for a vacation trip! It is just a shame that they didn’t really go anywhere (yes Sydney, and then when Harriet went to find Nick), but it is the thought that counts. Next time though it would be fun to see them explore a bit more.
-There is some modelling. I was already worried there would be none, but in the end there were 2 modelling jobs for Harriet. And they were oh so fun. Especially the first one. I laughed so hard at what she had to do, if only she had asked. 😛
-Nick and Harriet. -The seriousness in the book. It was still mostly lighthearted but there were some parts that had me in tears. 🙁
-Nat. I am so glad to see Nat she is a fun character, and I loved that she was able to travel with Harriet to Australia. Not only that but that she is also working hard to make a name for herself in the world of fashion. It was such a delight to see her light up like a Christmas tree when Harriet told her of the plan.
-The ending was perfection. Definitely a perfect closing to a good series.

Now for the bad:
-Harriet. Sorry, on the one hand I just love this girl, but mostly I just want to throw something at her head and hope she gets some common sense. Because she is clearly still missing that. There were lots of moments in this book that just had me frustrated. If only she would just stop, think, and think some more. But oh no, this little girl just goes into a frenzy immediately. rolls eyes
-What was going on with Yuka. -The whole: You must be British. I just was slightly annoyed with that after a while. Yes, we get it.
-The fact that Harriet didn’t know that Australia also used Celcius….. I was just rolling my eyes at this part, I would think Harriet would know only the US and its territories use Fahrenheit..
-Nick and Harriet and Jasper.

But all in all I enjoyed this final book, I will miss the series. I have been following it since the first book came out, looking forward to each new book, pre-ordering them as they popped up on Amazon. Hopefully one day Holly Smale will write a new series. Also plus points go to the cover!