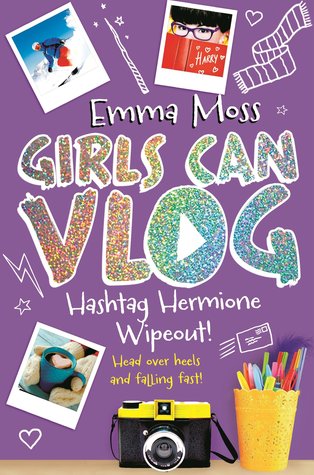 The third book in the Girls Can Vlog series, just one more to go, though of course I am kind of hoping that we will just go back to Lucy again and have another round of books.

5 stars, even if I found the drama to be a tad bit overkill, plus Hermione’s mood swings were just EH. Plus I had hoped for a bit more skiing and less sitting around doing nothing at all. :|Hermione was an interesting character, I loved that she reads books, I love how enthusiastic she is about reading, and how she disappears into books. So I was definitely looking forward to this book, a whole book about Hermione!

And we get a few vlogs by her, and I loved them, it was so much fun to see her gush about books, about conventions (how I wish I could go to such a book convention), about her favourite characters (I agree with most of them, except for the Hermione (HP) one). I wish we could see her room, it is always something to read about a reading girl’s bedroom, but it is another thing when we can see it. I want to see how full her room is. Is it just as bad as mine, back when I was a teenager and I just had a bedroom to stuff everything in (OK, these days it is still bad, and I got several rooms). 😛
I wish I could be so confident (and maybe less OMG privacy) to make vlogs about my books. I would probably gush a whole lot about my favourites, or about books I just read. Squee and fangirl when books are coming out. Book shimmy when I get a new book in my hands. Believe me, I do all those things a lot, just ask my boyfriend and friends.

The book is also about the divorce between Hermione’s parents. I just wanted to hug her at times, but at other times I wanted to shake her. She was blaming her mom (and yes her mom was a bit eh at times), but sorry girl, these things don’t just happen from one side. I knew what was going on with her dad before it was revealed at the end. It was just too obvious. And I also knew how she would take the news of it. 🙁 I was also a bit sad for her because of the childish-ness of her parents. My word, hiding in the toilet because your ex husband is here and then apping your kid to see if he is gone? Whut? How old are you again? 5?

The ski trip was a delight, it already started off the right way with the trip to France. Ohhh, Karma sure dealt a stinky card to Dakota. Poor Kayleigh, I don’t like the girl, but she sure doesn’t deserve this. Ick! I probably should feel sorry for Dakota, given that I know how car/travel sickness is (urghhhh), but I just can’t. She just kept being rude afterwards.

The ski trip itself was fun, though I felt sorry for Jessie. How did they make such a mistake? But thankfully they could still see each other and still make vlogs. I definitely loved the vlogs they made during the trip, and it was fun to see what topics they brought up. Not much skiing, but at least stuff to do with skiing. I also was happy for them that they are getting more and more views and subscribers.
Astrid and Thierry were fun side-characters. Thierry was so sweet, though I wish he had made things clear from the start, then maybe it wouldn’t have turned out to be such a mess. Still I liked our French bookguy. <3

I was shaking my head at Jessie. Really girl? Why didn’t you just stay in your bed. Being kind is good, but is it really worth it now?

What more? Mm, I loved all the vlogs, before, during, and after the ski trip, there were loads of them, and I always enjoy reading them. I think one of my favourite would be Hermione and her Paw Paw, that one was just adorable!

I indeed agree with Morgan, Abby needs to sort out her love life. It was quite annoying to see her flirt with Ben even though he is in a relationship (maybe not that voluntarily though) with Dakota. Same goes for him though, he shouldn’t flirt and send mixed signals. Plus I found it a bit unfair for Charlie. Poor guy. 🙁

There were just 2 things I didn’t particularly like (and for 1 I will probably get burned by people, but eh):
The drama was a bit too overkill (OMG worst day ever in my life, 5 minutes later, oh maybe not that bad rolls eyes). Especially the Youtube stuff. I am not saying that bullying is OK or racism for that matter, I was bullied myself, but really, Youtube is generally seen as a cesspool in regards to comments. Same go for many sites. Trolls are rampant everywhere, welcome to the internet. I generally don’t even take much value in what is being said in the comments, nor do I even read them, unless I want to know if someone has a tracklist for the songs playing in the compilation of Nightcore I am listening to at the moment. But other than that, I avoid it.
Again, I am not saying that bullying, or racism is good, but really I thought it was a bit overdone. Especially with Dakota popping in constantly for some magic reason to make a bad comment as well, but I guess is not the same as the racist comments (also really, why does she keep popping back, why not just ban her for once?). And then the revelation to who the troll was… eh, silly at best, rolling my eyes at worst. So yeah, it really could have done without all this.

Plus I was quite disappointed with the skiing trip. There wasn’t that much skiing at all, it just felt too bad that x happened. When I read this was about a skiing trip I was just looking forward to skiing, or snowboarding as one of their friends is doing, but instead it was just a bit of skiing, then x happens, and then all we get is complaints all the time.

But all in all, a terrific book with lots of fun, a girl who loves books, a bit of skiing, lots and lots of vlogs, and much much more! I would highly recommend this book to everyone!