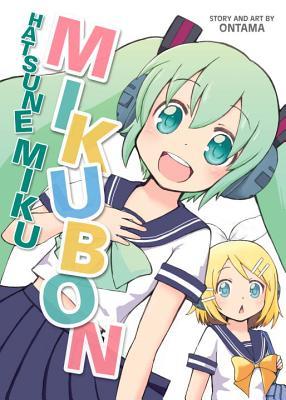 I just couldn’t resist this manga when I spotted it, I had to order it. And after reading, I am definitely glad I did.

Sure, there were a few things here and there that weren’t too good. For instance the translation seemed wonky at best. Some sentences didn’t make sense (grammatically). Maybe it was also due to the translation that at times I lost where I was in the story. Sometimes x would happen and then suddenly y popped up.

I was hoping for more school stories, and less of that crappy laboratory stuff. Those parts were just terrible, and I found myself quickly reading them to get to the school stuff again. The school stuff was mostly hilarious, especially with how the characters interact.

Luka is of course the fabulous popular girl who loves Miku a bit too much (almost bordering on creepy). I laughed so hard when people died due to nose-bleeding because Luka winked or even just looked at them. 😛 Eh, at least they died in a happy way.
Then there is Rin, who is, as expected, totally overprotective over her twin brother Len. It was quite hilarious to see her go in frenzy mode when someone dared to flirt with her precious brother.
Kaito and Meiko are there as sempai/teachers, and it was definitely a job for them. Though it was funny to see how much they differ in teaching.
We also have a weird girl named Anna who is the principal and likes to wear sexy clothes (really, no clue why).
Lastly we have the main girl, Hatsune (or Hachune as some might call her, even in this book rolls eyes). She is a sweet girl, but totally hopeless at school. One wonders how she even got accepted to the school. It was quite funny when we found out why Hatsune sucked so much at lessons (I can say I didn’t expect that).
It was quite fun to see Teto pop up as well. She isn’t a vocaloid, but an Utauloid so I was surprised to see her. If anything I would have expected IA to pop up in the mix.

The manga is 4koma, which I didn’t entirely expect, I was thinking it would just be normal manga style, but eh, 4koma works as well, even if, for some reason, it takes me longer to read that format.

I wouldn’t mind another manga with vocaloid + school. It is a mix that works pretty well.

The art to this one was cute, and funny. It really fit the vocaloids, but also the format of the manga (4koma).

I would recommend this one. Vocaloid lover or not, I am sure people will quite like this one!