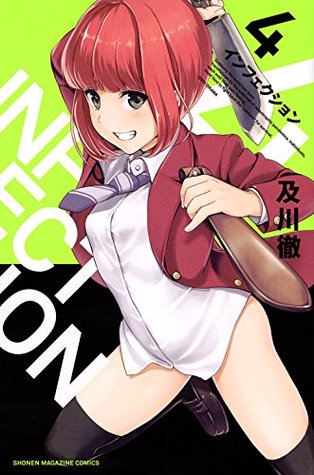 Yep, this was the last volume I am reading in this series. I may pick it up just to read the last chapters, but for now, dropped.

I was just so disgusted by the new form of the monsters. Not only are they overpowered, way too fast, creepy as hell, but it is also a trope I could do without. The manga was fine with just the normal zombies, the normal carriers. There was enough survival, enough creepiness. But then, like with some other zombie books/manga, the author has to add a new addition to the party, and that is this overpowered grossness that is prowling around now. Eating people left and right. 😐

Add to that the whole sister thing, and the (yet another) new thing that happens to the carrier. Sorry, I just couldn’t care any more. It feels like the author is running out of ideas and just adds random stuff in and hoping that people will read the manga.

It only really made the manga confusing and at times hard to follow. Which is a shame, the basis of the story is great, the idea was also great, but now it is just all confusing and a mess.

On top of that, the fanservice was always around, but I really can’t stand it now. It was just too much, too often at weird times. Really, I was so happy when that girl finally had some pants on her butt, but of course within pages she lost it and never wears it again.

One of the couples I was I hoping for is slowly forming. Too bad that the MC is so oblivious to everything around him sighs.

Then there is something that I also had a problem with in the previous one, and I will put what I posted in my previous volume review here again, in bold. Then followed by a new comment since there were some stuff happening in this volume.
I also didn’t like the appearance of said bleh character. And with me many others, given the comments I saw online about it. She is a horrible, manipulative person who will do anything for herself to survive and will take down anyone who she can’t use any more, or who is getting in the way. Even later during a pretty shocking moment she did the one thing I kind of expected her to do, but was hoping wouldn’t happen. Time and time again she shows us that she can’t be trusted. She hurts people left and right. Sadly, thanks to this acting of hers, plus how she treats males, is how she survived for so long. I do hope that she won’t be around long, or that, like with other series, she will get a redemption arc and we suddenly have to forgive her or something.
Yep, she went full redemption mode in this one, though I knew instantly what she was playing at, and indeed it happened as I predicted. I really dislike this character. I know I should be worried about her for what is probably going to happen to her because of her being so nosy, but eh. Truthfully I am happy she might not be around for a while again. Then again I can also see our MC rescue her again. sighs

The ending of the volume ends with yet another cliffhanger, and I was just rolling my eyes at it all. Sure, add that as well. Why not?

So yeah, I will be dropping this one, and hoping that one day it will be finished so I can check the last volume or chapter.