After 1 and half years we have a new Pet Human book! I just adored the previous book, and I was eagerly waiting for the new one! 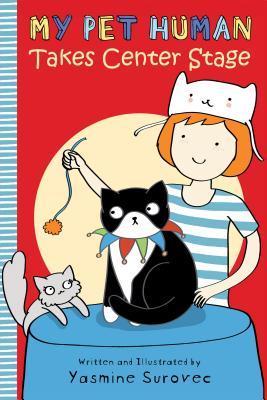 And now it is here, and it has a lot of cuteness again with the addition of a new kitten!

One of my favourite things about this book is that it is from the POV of the cat! Quite often it doesn’t work right (because the animal turns out to be highly annoying), but in this one it is perfect. Oliver is truly a cat in each and every way. And he is funny!

The cat and the kitten situation in this one reminded me of Garfield comics. I haven’t read those in years, but I was there when Nermal first arrived. And boy, that didn’t work out. Garfield pretty much acted the same way as Oliver did, while Nermal was being all cutesy and sweet and getting all the food and love, just like our kitten in this one. I have to say that while I hate Nermal, I did love our tiny little kitten in this one. She didn’t seem to have any ill intentions, instead was just trying to get along with Oliver.

I had such a laugh when Oliver hitched a ride in Freckles’s bag. I would think you could feel an additional weight added to your bag. 😛 The school was surprisingly accepting of Oliver (then again, who can resist those adorable eyes). I loved the club, and the adviser (cat lady alarm!).

The show, and the preparations towards it, were a delight. I was really amazed at Oliver and the kitten being able to do all those tricks. As all other people said, generally cats don’t let themselves be bossed around. The show was cute (though I did feel sorry for Jin’s animals, then again, I also found them adorable and I still wish I could put tiny dresses on my hamster).

The outcome of the adoption? I didn’t see it coming, I had another ending in my head, but I am still very much happy with this one. It is perfect!

There was just one thing I didn’t entirely like, the fact that they just dumped a new kitten without any warning with Oliver. This is just a bad idea. I would think you want to have them meet up slowly, bit by bit. It ended up all right in this one, though Oliver’s feelings were hurt, but I have heard enough cases were doing a thing like this ended in not a lot of good.
Plus if you want to introduce a cat, or another animal, be sure to also give the older pet the same amount of attention as well. 🙁 I just wanted to hug and hold Oliver, even though that would mean I would probably die of my allergies, but so worth it.

The book is of course full of art, and I just adore the style of it. It is cute, and the cats are just the sweetest!

I hope that we will have many more Oliver/My Pet Human books in the future. I would highly recommend this book to everyone!