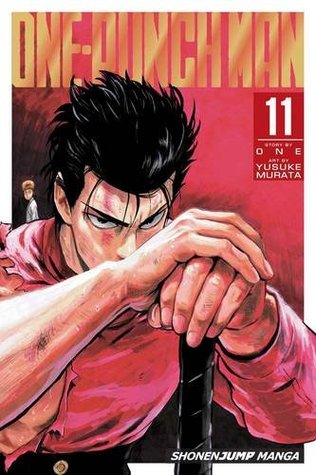 I hadn’t expected this one to pop up already. 😛 But boy, I am happy that it did, because I wanted to continue reading and seeing how everything would turn out.

And it turned out to be super-chaotic. That is why I am rating this a 3.5 stars. It had good battles (not only with the monsters vs the humans/heroes, but also with Saitama/Charanko’s competition), it had a few hilarious scenes spread here and there (like the whole Zoomen stuff, I just laughed so hard when Saitama said he found the pink one sexy, and how, when he got a team assignment, he tried to get his team to go for colour/coded names and also a team name), the story also moved along. But yeah, suddenly we have all sorts of monsters in various classifications, suddenly there is chaos everywhere, suddenly attacks everywhere, and in the mean time we only see other heroes get their butt kicked, and we don’t see Saitama. He only gets into the spotlight during the Zoomen parts, and also when he is participating in the tournament (that the tournament isn’t cancelled is a miracle I guess).

I was happy to see other heroes get the spotlight, but hey, I still read this one because I think Saitama is utterly brilliant. And thus I want to see more of him.

Plus I am getting slightly tired of that Hero Hunter stuff. He is just so annoying, and I wish Saitama would just pass by again (like he did in an earlier volume) and knock him out again. Go go Saitama!

I kind of miss that, a big foe, or foes appear, and Saitama just knocks them out in one punch. It was also the best part, as it also meant the battles wouldn’t take long (and I still hate endless battles).

1 plus point goes to the first pages (the swimming pool spread). I just loved seeking out the heroes, see what they are doing (one of them is clogging/and potentially breaking the slide, Saitama is having a brainfreeze). It was definitely a fun addition, and I wouldn’t mind a fun short story to go with it.

The art is still utterly brilliant, I am a big fan of the 2-page spreads that happen when battles get hot and heavy.

All in all, still a good volume, but just a bit too chaotic and all over the place for me.