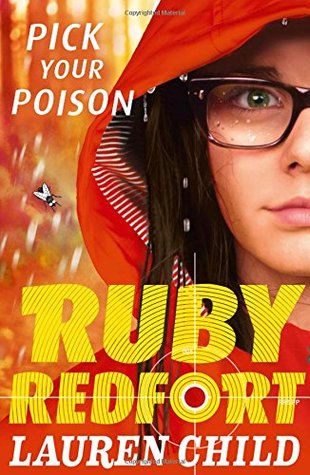 My first Ruby Redfort book, but certainly it won’t be the last one! I will be getting this whole series. Maybe, I will wait until summer and my vacation, so I can eat, um read, these while relaxing in the sun (at least I hope it will be sunny :P).

When I visited Hebban (a Dutch book site) and went to the giveaway page I spotted a giveaway for this book. It was for a reading club. 10 people would be chosen to participate. Discussions, reviews, and much more. Then a few days ago I picked up a big package at my neighbor’s (since I wasn’t home), all surprised, and then it turned out to be this book! Of course I squealed, which startled my boyfriend.

I have to say, that while a lot of sites, also including Hebban, say that this book can be read separately and the same goes for every book, that I wasn’t agreeing with it that much. On the one hand they do spoil/give away what happened in previous cases, but there is a lot that I feel could have been better had I read these in order. Now often I just didn’t get why everyone was so afraid of x or y villain, some of the relationships seemed to exist for years and it feels like I missed some important bonding events, some of the characters I still don’t get (Quent), how she got into Spectrum and how Spectrum works exactly (we do see some stuff, but still it is pretty much clear that one has to have read the other books to know more).

The plan was to read 100 pages each day, but um, yeah, that failed on the third day, today. I wanted to read 150 pages, because then I could finish the book tomorrow, instead of Sunday, but well… the book just got even more fun and I just flew through it. Every moment I had free, I read.

I really loved this book, I am giving extra points for the fact that this takes place in a time before we had cellphones, before internet, before anything really fancy actually. The kids use pay phones, or the landline, Ruby and Clancy have a secret code and leave notes. If they want to research something they use their brains, and in Ruby’s case lots of books. It was something that I loved. So many detective stuff these days are full of people just googling stuff and figuring it out within the blink of an eye, while with this one you actually had fun seeing the characters struggle and think about the answers.
Not only that the language also fitted that time perfectly.

Ruby was my favourite character in the entire book. She is smart, sweet, kick-ass, and will definitely figure out things way before anyone else but isn’t stuck up about it. She will defend her friends, her family. She won’t rat anyone out. Her skills vary a lot, it isn’t that she is interested in one subject, oh no, this girl reads everything it seems. And that is the next thing, she loves reading and has books everywhere. Sorry, I just got a weak spot for people who read, who are bookworms like me!
Ruby is also brave, and I can clearly see how she got into Spectrum.
But she is also a good friend, sticking up for her friends, and making friends with even the unlikeliest people.
Then again, she is seemingly also good at making enemies left and right. 😛

Clancy and Hitch both share the second spot for great character. I really liked them both. Clancy for how great of a friend he is, for how he is always there for Ruby. Of course at times he gets angry, which is logical given Ruby’s consistent record of getting somewhere late. But he and Ruby often discuss cases, or puzzles, and together they find out what is going on. I really liked how Clancy didn’t immediately thought it was Ruby when he was called to the principal. Instead he went on to find who did all those things to make Ruby a suspect. Even later when things start to get heated, he doesn’t wait and cower, he just jumps right in.

Hitch was awesome, I loved how he was a secret agent, but also a butler/house keeper. He really reminded me of Sebastian from Kuroshitsuji. He is a perfect butler with a double agenda. I loved how caring and protective he was about Ruby. I would see him not only as a butler, or a house keeper, but also as one of her friends.

Then there is a whole cast of other characters, from Blacker (the agent from Spectrum) to Del (who I at times liked and at other times just wanted to throw in a pool) to baby Lemon (who plays quite a big role, and is a real help to Ruby (well if he shuts his trap).

I loved how everything came together in the end. How even some things I didn’t expect had something to do with the bigger picture! It was definitely a moment that made me go AH!! and look startled. I won’t spoil what all those things are of course or what the bigger picture is in the end, you will have to read on your own.

I had a laugh many times at the situations that Ruby gets into. She really gets into a lot of trouble at times, doesn’t she?

I love how the title from the book is also explained and you can clearly see the correlation, with my book’s edition it was even better since there is also an apple included on the cover!

The villains names are all cheesy and corny. Count von Viscount, Lorelei von Leyden, Babyface Marshall. I am definitely curious to other criminals, do they all have such cheesy names?

There was one thing I didn’t particularly like and that was how some of the conversations suddenly went italic. It was a bit confusing, one moment you would be reading normal and then italics. And it didn’t happen with each conversation, so eh.

Well, I could go on and on some more about the book, but I will keep it at this. I really enjoyed the book, the pacing was really fantastic (though a bit slow at some points, but then it picks up and you have to hold on for a good ride), there were countless of hilarious quotes that I will savour, Ruby is awesome. I am definitely happy I was picked to participate in this reading club!