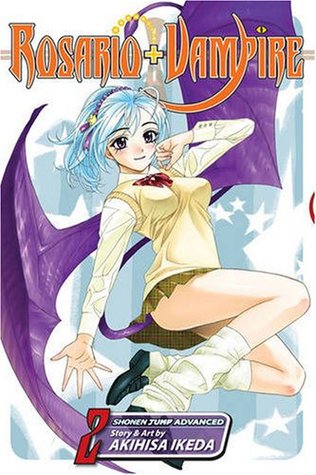 The introduction to the worst character of all, yes, there are some enemies I would rather see than this girl.

Yukari. I hated her the first time I read this manga, I hated her when I saw her in the anime. She is annoying, frustrating, and for someone who is a so-called genius not that smart. Doesn’t she see that she isn’t making people happy? If you love someone you don’t cling to them, or stalk them, or even hurt their friends just because they get close. I would even call her a witch, but more like a insert word that rhymes with witch. Even later, as the story continues, she doesn’t improve. She is still annoying, weak, and meh.

Luckily, her introduction doesn’t last long, it is just a shame that she will now be in the party forever. So we will see a lot of her as the series continues.

The rest of the volume was pretty great, we got missing girls, an art-teacher with a secret, a yakuza like school committee, a pervert who is hurting Kurumu, a birthday, and a cliffhanger at the end. It was definitely a packed volume, and I have to say that even though the worst character is in it, I did enjoy myself a lot.

While the Kurumu parts were a bit too much at times, it did bring the group closer together, and I hope that in the future when bad stuff happen to one of them, that they will talk it over and ask for help. No one should have to go through the stuff that happened to Kurumu.

We meet new monsters, and I always love those little notes next to their introduction about what kind of monster they are. So interesting to read!

We still continue on the theme of humans vs monsters, and we have an added middle part to it, witches. Not liked in the human world, and shunned in the monster world due to them not being monsters but closer to humans. At these moments I did feel a glimmer of sadness for Yukari.

I had hoped for a confession, but somewhere in my mind I knew that such a thing will be taking a long time to come. Moka is just too oblivious and it doesn’t help that Tsukune gets interrupted by other people all the time.

I also can’t wait for the art to improve, the art is still pretty cartoony and at times a bit bad.

But all in all, definitely a volume that I enjoyed, and I will be reading the next volume soon. I am not sure if I will write a review for each and every one of them as I just want to read them in quick succession, because it is so much fun to read, which I can’t do if I have to stop to write a review every time. 😛