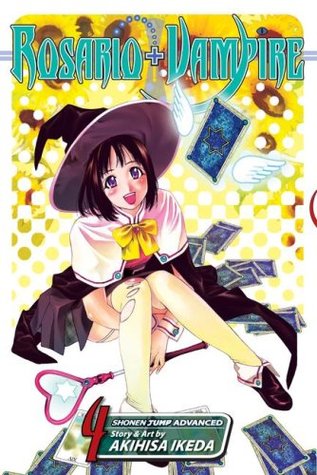 These 2 volumes feature the Ruby/Witch’s Knoll arc + the introduction of Mizore who will be the next girl in Tsukune’s harem.

Let me just start that the Ruby arc went a bit different from what I had in my mind. Which is probably a blame for the anime. 😛 It had more action, and it was way more hectic than the manga is. Now it felt a bit anti-climatic. Yep, in a way the anime did a better job on something than the manga, and that is saying something as the anime is pretty much a mess (still good, but yes a mess).
I also feel sorry that it ended the way it did, I would have loved more Ruby, see how she is doing, see if she can handle the loss. But I guess she was busy herself, we meet her again in volume 6 when she plays another big role and is able to repay Tsukune (more on that in the next volume review).
But it is also a bit typical of battles in Rosario, especially the earlier ones. X starts to fight Tsukune and friends, Tsukune pulls rosario, Inner Moka arrives, kicks butt, and done. These days we also have some Tsukune doing some weird stuff (because of what is running through his blood is corrupting him). But yeah, it does get a bit boring and bland. In a way I can’t wait for the second season. That one had some epic, long battles.

Back to the volumes at hand. I am definitely happy to see Ruby, she is my favourite witch girl, and I hope she can help Yukari feel more at home. It seems that there aren’t many witches, or they are hiding really well given the crap that happens to them. I do want more witches, not only for Yukari’s sake, but for all the witches sake. They may be between a human and a monster, they are super awesome.

Yep, I am still not liking Yukari. She is such a cry baby, and just keeps on doing stupid things. Her reactions in the human world were just over the top. Yes, I know she was scared, but that is still no reason to want to blow up people. No. Just no.
That is the only reason why I wasn’t looking forward to this arc. Yes, it brought Ruby, and some creepy stuff happening at the Witch’s knoll, but it also brought lots of Yukari as these new characters are witches like she is.

Also what is up with the teacher? Just leaving her students there. I guess she trusts that they will do fine, but really, I found it ridiculous. Especially considering the whole Humans vs Monsters thing, you would think that a teacher would be around to ensure everything goes fine.

After the arc we go to Mizore’s introduction. She is a snow woman + an enormous stalker. I have to say that at first I didn’t like her, but as soon as she learns the error of her way and an annoying/creepy person leaves the stage, that she becomes much better, and much sweeter. Plus I just had to laugh at the places she pops up. One moment you think you are safe, the next she is popping up from behind a desk. 😛 Poor Tsukune is getting all the crazy girls after him.
Also her hairstyle change was just adorable, she looks even prettier now. <3

Plus we are definitely seeing more of how Tsukune is affected by Moka’s blood. The next volume (and probably the next one after that) will delve deeper in that, as it is now really going the wrong way for Tsukune. I know he will be fine (because I read the whole series + he is the MC) but I know that it won’t be an easy ride for him. Poor Tsukune. 🙁

So all in all I definitely enjoyed these 2 volumes, even with the Ruby arc ending a bit weird. Still would recommend this series to everyone.