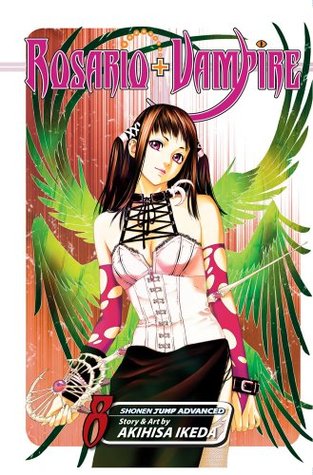 This is a short-ish review for the last 3 volumes in the first season of this series (volume 8-10).

These 3 volumes are mostly about one thing, the festival. Volume 8, and half of Volume 9 are about the pre-festival stuff, but also some revelations about mongrels, about one of the most important players in the pre-festival stuff, Hokuto. Plus some more information about Kiriya. And of course lots of exciting battles!
The second half of volume 9 is about the festival, in which we meet a few parents of our characters, but also a childhood friend of Tsukune (I so didn’t like her, and wasn’t looking forward to seeing her). Then of course poop hits the fan, and that sets the mood for the 10th volume. But the 10th volume also brought a visit home, chaos as the girls also visit Tsukune (poor mom), and the start of a new year at the academy!

As you can see there is a lot that is going on in these 3 last volumes, I definitely wasn’t bored once. Every time you thought you could breathe something would happen and you would either gasp in shock or laugh so hard that you can’t breathe. Poor Tsukune though, thinking he would be having a nice calm festival time, but instead is getting roped in by both Kurumu and Mizore. 😛 Not to mention that his childhood friend also pops by.

I am not sure which part in these volumes I found the best. I loved that the action and the comedy did a real tag-team effort. It was all a pretty smooth transition between the two genres. Of course one wonders if there is ever a calm day for our group, since it seems that they can never really rest.

I am getting a bit tired of so many people targeting Moka, and even going so far as to (almost) assault her….. It is just getting a bit disturbing that this behaviour is apparently normal under the monster males. Oh, we want x girl, just grab her when she is alone, and pull off her clothes. No, just no.

Hokuto and what he was? Of course I already knew, not my first time reading it, but it was still a good revelation, though I did feel so sad for Tsukune. If only this was another time, if only he had met Hokuto before x happened. 🙁

I still love the theme of monsters and humans living in peace, and how hard Tsukune wishes this would become reality and not just a dream.

I also would like to see Tsukune man up and just tell the other girls that Moka is the only one for him. After such a long time they do deserve an answer.

All in all, this was a terrific first season, and I enjoyed it a lot, I am so glad that I decided to re-read it. I would highly recommend this manga. It has some fanservice (underwear shots, boob grabs), but it never really interferes with the story at hand. I also love how the art has been changing, and how it will keep on changing as the series progresses in season two.