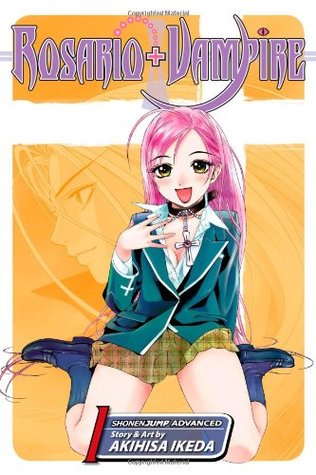 A friend of mine on Twitter is reading the second season, and had to re-read some of the books so she could read the new volumes she bought. That brought the idea in my head to also re-read this series. I will just be re-reading the first season though, the second one is still a bit too fresh on my mind.

It was definitely fun to go back to the world of Rosario + Vampire! I missed the characters, the humour, the silliness. Though I definitely miss the art from the later volumes. I am still amazed at how much the art changed. From a bit more cartoony to gorgeous details.

In this volume we are introduced to our MC, Tsukune. We also meet Moka, and her alter ego hidden in her rosario. Then there is our succubus Kurumu. Later we meet Gin who I know will grow out to be a great character but in this one was still a perverted insert some bad words.

Tsukune is, sorry to say, a wuss. Then again, I can imagine why. He is now stuck in a world with monsters. Monsters everywhere. It is only thanks to the teachers wanting their students to practice their human form that he isn’t found out. Though of course some monsters may have an idea what he is, since he still smells like a human.
He becomes a bit braver by the end, though that is mostly thanks to Moka. He really likes her a lot, and wants to stay with her. Plus what life does he have in the human world? After all he failed all (how does one even do that) exams for other schools.
I am still a bit amazed that he was allowed to enter, I believe we do find out some hints as to why later, but at the moment it is a bit confusing.

Moka is sweet, but I was a bit annoyed with how easily she just bit Tsukune, never asking if he really wanted this. I get that he tastes yummy girl, but really, that is not a valid reason to just bite him out of the blue. But she does get it later on in this volume, and I was definitely happy with it. I know she will get better as the story continues and I can’t wait to see that happen.
Her alter-ego, hidden in a rosario? Still loving her, and how kick-ass she is!

Kurumu was a bit annoying at the beginning, I wished she would get the hint, but in overall she is a sweet girl, plus I can kind of see why she was acting like this. I know she, like Moka, will get even better and that I will be rooting for her.

The idea of a monster school and a monster world is a fun one, and I can’t wait to see that getting explored more. Plus I want to see more different monsters, we already got a whole batch of them in this one. From werewolves, mermaids to succubi to vampires, and more!

There is a lot of humour in this one, and I enjoy it a lot. It makes the book so much fun in between Tsukune trying to survive his day, and the battles that happen because he is with Moka.

There is also a bit of fanservice. Mostly it is underwear shots, and often during the battles that happen.

And I guess I am back to shipping Moka and Tsukune again. 😛 I know I did a lot of shipping when I first read the series (and also when I first watch the anime when it aired). These two are just perfect together!

The book also sets the stage for the whole monsters x humans debate. I know this is one of the biggest things in the manga, as it also expands to the next season. It is quite interesting that they added such a serious topic in the manga, and are able to weave it in the story so it matches. Also Tsukune will play a big role in this debate, he already shows his feelings on the topic a few times in this manga, and I know that later he becomes even more of an ambassador for the cause.

I am not sure if I am looking forward to the next volume, it brings one of the most annoying characters in the entire series. A girl who, even at the end of season 2, I can’t like. But I will keep reading, as I know that some epic stuff is going to happen.