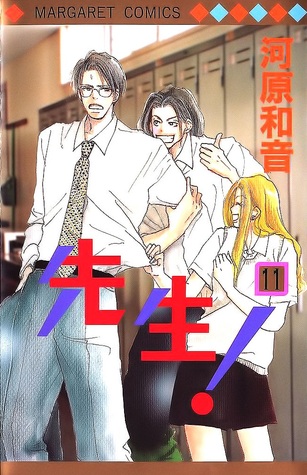 Another batch review, this time the volumes were much and much better. Still a lot of silly drama though.

I am kind of sad that I am almost through with this series, when I started I thought it would take me a while. Then I got hooked on this series and well, I am a lost case now. 😛 I am flying through these books, I want to know if Itou and Hibiki will stay together, if they get a happy ending. I also want to know if Nakajima and Kosuke get together for real. They made a leap in these volumes, which made me infinitely happy. These volumes also focus a lot on the whole studying for exams and the future.

Volume 11: 4 stars. Yay, stalker-girl situation solved for now! I hope she stays gone, really, she is ruining the series for me. 😐
Nagisa and Chigusa make up and are lovers again in the right way, without too much arguing (I say too much as everyone knows they love arguing). Chigusa saw in that she too was at fault. That she too should have done a bit more for Nagisa. And Nagisa, haha, he didn’t realise what our stalker-girl was up to. He is so oblivious and innocent, it is quite cute, but also a bit annoying that he just can’t see this.
Then we have yet another trip, and this time I liked it even more as it meant that our couple (Itou x Hibiki) were stuck together. They couldn’t reach the inn with their friends, so they had to stay at a hotel on their own. Oh my! It was adorable, though I had hoped for a bit more romance. Eh, I guess they can’t do that yet, but at least we got some romantic scenes, and some kisses. Awwww!
And thus starts a new part with a new character, I have worries for that new guy. I just don’t trust it. I am sure he will turn out to be a rival. Haha, yes, I know terrible of me, but so far everyone knew introduced starts off as a rival. 😛

Volume 12: 4 stars.  This time the main focus seems to be on Kosuke and his ex. Hikibi and Chigusa meet her at the prep school, and they befriend her easily. I am not sure what to think of Hatsume (the ex). It has been years after this and you are still hung up? You are practically stalking the poor guy. And yes, I am also not approving of Kosuke, oh no, running away is cowardly, not being honest because a girl is crying is also not OK. They are both wrong in what they do. Kosuke should have explained it to her immediately when stuff happened.
Hibiki kind of annoyed me in this one. I get that she wants to right things, I see that she wants the female teacher to be honest about her feelings towards Kosuke, I see she wants Kosuke to be honest, but really, does she have to butt in so much?
There are also some fleeting cute moments with Itou, I wish there were more!
All in all, a drama-packed volume!

Volume 13: 4 stars. This volume was a mixture of frustration (at the parents of Kosuke, Chigusa, and especially Hibiki, at the whole Kosuke x Hatsume x Nakajima situation).
At least the Kosuke x Hatsume x Nakajima situation is finally solved, it only took Nakajima and Kosuke 13 volumes to get to this point, for Nakajima to finally confess what she feels, and that she is telling Kosuke she will wait for him (awwww, swoons).
I am glad that Hatsume is out of the picture, dear Lord that girl was having some delusions. 😐 Even being a mean girl towards Nakajima and saying she was Kosuke’s girl.
I am a bit worried about the fact that she saw Itou call Hibiki…. I hope this won’t turn out to be some kind of stupid dramarama.
Nakajima was a bit frustrating. I get that it is hard to live with those feelings, but to run towards Itou all the time? It will only hurt other parties + Itou really has no interest in Nakajima. I am glad he said what he said. It was definitely needed.
We have some sweet moments for Itou and Hibiki!
I really didn’t like the parents. Do you know how hard it is to decide something at the age of 17. Some have a clear view, but some are wavering, while others don’t know it at all. And is that really that strange? Is it really needed to be so mean about it. That if your kid wants to just relax a bit, or watch a bit of tv that you immediately start to complain that she is lazy, does nothing, and should study? All of the characters are working hard, studying, trying to find something for them. I am worried about Hibiki. 🙁

Volume 14: 4.5 stars. And so the parents get what their kids are going through. I was really admiring Itou and how strong he stayed. He could have easily swayed, but he put his foot on the ground and told the parents honestly how their kids felt, how hard they were already working, and also that he will be helping them out. Getting them into the right schools. Helping with exams. I was really happy with Itou. He is such a sweet guy.
We also see a flashback to when our trio got to school first. How they met up, how they became a tight group of friends. I was quite amazed at how Chigusa and Hibiki changed. They really grew up! I am glad that the mangaka is adding these scenes.
And also we have a return character, just for a short while though. I am glad that issue is now also finally done and over. Now Nakajima and Kosuke can focus on each other.
Lastly we have a lot of archery. It is the final moments for our group, there is competitions and much more. I did feel for Hibiki, but I just wish she was honest. Yes, you can’t always go to your teacher/Itou, but really, if you are this stressed out, even to the point that you would waver at the competition, then it is not healthy. Just be honest! Tell them you are not sure how to balance school and the club. Tell them you are worried! I am sure you can make a schedule together.