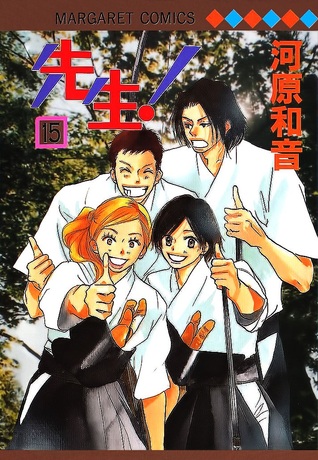 And so the series comes to a close in a very lovely, romantic way!

This series had its ups and downs (especially volume 17 and 18 were just ridiculous) The drama at times was just silly and often (way too) easily solved/fixed (often in the next chapter/volume). But the romance was good, not only the MC and the teacher are happy, but also the MC’s best friend and her boyfriend, and since everything is now over, and the promise was made, also between the MC’s best guyfriend and the female teacher.

It was just a shame they didn’t add an epilogue, but instead went for a one-shot that had nothing to do with the manga. 😐

So once again, this will be my Goodreads small reviews. I wrote one for each volume. 🙂

Volume 15: 4.5 stars.  Poor Hibiki, but I wish she was a bit more honest and open with Itou. It is not like he can read your mind (though at times it does seem like he can. :P), so tell him if something is bothering you. He is still your boyfriend. Talk to him!
I had quite a laugh with Chigusa when she was kissed (french kiss I am guessing) by Nagisa. How fast she ran away, and how she called it gross. Not really the best reaction, but eh, this is Chigusa for you. And thanks to this she found out how Hibiki was feeling.
The competition was quite fun, they really tried their hardest. And I cried a bit when they left the archery club (kind of weird that they do that so soon in the year, I guess for most they will be focusing on studying and exams).
Poor Hibiki who can’t see her boyfriend for a long time because of all the studying she has to do. It was quite sweet when they managed to get together. Awww! Plus also that part when she came back from the competition (before she had all that study stuff XL). So sweet!
We once again meet with the captain of the other school, and I laughed at the mission Chigusa and Hibiki had. I am quite curious about this character, I hope he won’t spill the secret. Oh dear.

Volume 16: 3.5 stars. Lots of anxiousness in this one. Hibiki, please girl, just talk to him. Just go to him. Just tell him how you feel. In this volume she is, for most, so anxious, so afraid. Just go to him. Or call him. He isn’t telepathic, he doesn’t know he is making you anxious. I was a bit frustrated with her. I know the relationship isn’t the easiest one, they still have to hide their love, but I am sure they can meet up and talk.
Next up is Fujioka making another appearance, and I am definitely worried about this. From knowing the mangaka I am sure there is drama and silliness in the future with this character in the main role. I actually feels sorry for him at the moment.
And Itou making stupid decisions for his girlfriend while she can easily tell him if she wants to or not. He should really stop assuming stuff. Like with the: You have never dated so you are going to miss the experience stuff. Really? Let her decide that on her own. Is it so hard to trust her?
I loved that Hibiki went to archery to clear her head. The burglary was scary, I am glad she is OK!
I also see a shift in characters. Normally we see a lot of Kosuke hanging out with the group, but in this volume he just popped up randomly. Most of the time it is Chigusa and Hibiki, or Chigusa, Nagisa, and Hibiki together. It is a bit weird, and I can imagine that Kosuke feels frustrated about it.

Volume 17: 1 star. ARGHHHHHH. flips tables and other furniture Yep, I knew it. This mangaka really can’t have anything go well with Itou and Hibiki. Oh no, of course not. Dear Lord in the Heavens. Does there really need to be so much silly, unnecessary, weird drama?
My predictions came true. Our pair And suddenly, as I would call that, Fujioka is to Hibiki. Of course he is. He is a hot guy, and of course he has an interest in Hibiki. Of course he isn’t caring that her heart is full of Itou. Oh no, she just has to be with him, because she needs experience or what else kind of bull. Bah. Bah and bah. This ruined Fujioka for me. He was a sweet tender kind guy, but now I just want to throw him off a bridge.
Well, I will still keep reading, I only got 3 more volumes to go. I want to see Itou and Hibiki get together, and if they won’t, I will really rage quit. 😐

Volume 18: 2 stars. ARghhhhhhhhhhhhhh, the drama continues and even escalates. I didn’t like Fujioka after the last volume, but the crap he pulled in this one really topped everything and I hate him now. Bah, what a terrible character. I can imagine why he did what he did, that is not it, but I think it is really bad that he did it. That he had the guts to say those words. That he doesn’t even care about how Hibiki would feel. Everyone can see she is still for Itou, and that it will never change, yet, he keeps pushing her constantly to be with him. 😐 That is not how relationships work, and that is also not how you will get the girl. Not at all. I so hope that the next volume will have Itou and Hibiki making up. I will be terribly sad if they didn’t resolve this, and if the manga ends with them not being together.
I am giving 1 extra star because of Kosuke! He is an interesting character, but what he did in this one? My respect is going up for him. He is a true friend to Hibiki. And yes, I am not for violence, but Itou definitely deserved that. Not only because he made Hibiki cry/sad, but also because Itou hurt other people around her. Included Kosuke’s love, Nakajima who tried to reason with Itou, but who got rejected real hard. 😐

Volume 19: 4 stars.  Ehhhhhhhh, slightly frustrated with this volume. On the one hand it was an epic volume and I loved it so much, but on the other hand.. I felt that how the break was handled, and how quickly it was resolved seemed silly. Oh hey, we broke up in x because I was being stupid, let’s get back together again? I had expected better of Itou. It seems that he is just as childish as the teens he often talks to. 😐
Of course I was happy, because it meant they were together again! It means that we will be on track to some more romance, and hopefully, with the year ending soon and thus Hibiki not being a student any more, a proposal! hopes
Poor poor Nagisa, and poor Chigusa. Just when you think x is done, y steps around the corner and throws a bucket of ice water over your head. I definitely didn’t expect this to happen, and on the one hand I also think it is a bit selfish of the parents. Nagisa did his best to get accepted in this school, his year isn’t even over, and you expect him to do this and that? Bah. Also that he was punched by his brothers…. shakes head
I can’t wait to see how the manga will be concluded. excited

Volume 20: 5 stars. 5 stars to this volume. 2 stars for the one-shot. I just didn’t care about it, even if it was cute in the end. I was still in the high and happiness of the ending for Sensei. Such a shame they didn’t just added an epilogue to the Sensei story, with Itou and Hibiki’s marriage, her going through college with Chigusa, plus I wouldn’t minded seeing a better conclusion for Nakajima x Kosuke.
But the Sensei final volume was perfection, I was so worried for Hibiki, would a college accept her, would she be able to be with Itou, would her best friend be with her? It was also really sweet, especially those last pages. Awwww, I am so delighted with this ending. It took 20 volumes, but finally, finally, they can be truly a couple!
The last chapter, the bonus chapter, is all about Itou, and I loved that it was added. It was just so nice to see him in High School, and then that last page was just wonderful. Awwww!
Definitely would recommend this series, even if it had a few parts that were just bleh or bland, the rest is just great.
The art style definitely improved as the manga progressed. I just love seeing that. 🙂