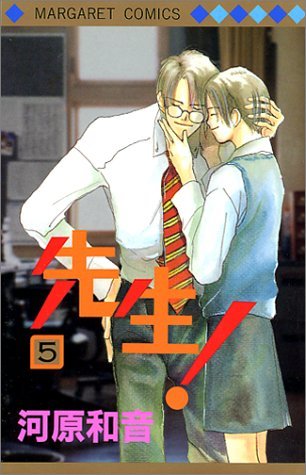 Another batch of reviews for this interesting (but at times, very frustrating) series.

There were a few good volumes (5, 6, 7), but then things went downhill with 8, 9 and 10. 😐 I also feel the chibis that often pop up are out of place. Especially when our main couple (Itou x Hibiki) is hugging. It seems like he is hugging a small child….

We are also now on the halfway mark! Even though it is at times not fun to read, I just can’t stop reading, I want to know if Itou and Hibiki can reach their happily ever after. I so wish it, I so hope for it.

So as I did yesterday, I will post the volume + number, then the rating, and then my small Goodreads review!

Volume 5: 4.5 stars. The first chapters were about Nagisa and him being a manipulative little insert very bad words here. I never liked him when we first saw him, but my dislike grew more and more with each chapter. What a disgusting little prick. 😐 You don’t do that kind of stuff. I was definitely cheering for Chigusa when she did that to Nagisa. Good girl! You are true best friend.
Itou was great again, and I loved his little gestures he made to protect Hibiki. From suddenly being there when she needed him, to not driving her to Nagisa for the date.
And the later chapters just made me cry in happiness. Finally! I hope they can be happy without anyone trying to break them up. I hope that both will talk if things start to get wonky. They are just the cutest together, and I loved all the hugs, kisses. How sweet he was. I also loved the flashback to Hibiki’s first year, how she met with Chigusa, but it also made her realise she has always been looking at Itou, and he has always been close to her. swoons in happiness

Volume 6: 5 stars. Awww, Itou and Hibiki are so cute together, I am really happy that they finally can be together. They make such a cute couple, plus I am really admiring that teacher for being so gentle, caring and mature about it all. I am liking him more and more, now if only he would stop smoking. 😛 Ick.
The Golden Week trip was lovely, it was really kind of Itou to take Chigusa and Kosuke too. Of course, it was kind of needed, given that he can’t really be seen with just his girlfriend. But next year! They made plans! Yay!
The Nagisa problem is solved, and we have a new couple forming. One I was already hoping would be one. I will definitely root and ship these two, hoping that they will get together and be happy. Squee! Everything is good now!
I will keep reading, I am not sure if I can find all the volumes, but I hope I will!

Volume 7: 4 stars. The Chigusa and who she is going to be with is solved in this one, and of course it is that guy. It was so obvious from the start that she would date him. He just fits the best with her. Even though I hated that he forced her to kiss him. No just no. You don’t force anyone.
And of course the little happiness our other couple has is ruined AGAIN by some insert words. Really, you hear that the teacher you like has a girlfriend? Instead of doing what every sane person would do you go after him like a stalker, touch him (even though he clearly doesn’t want that), even whisper mean words to Hibiki. Bah. What a terrible girl. I hope she moves away soon, or else…. I was so happy with the manga going into a nice flow, but of course the mangaka has to add a rival. Oh heavens forbid that Itou and Hibiki have a good relationship. sighs It is problems constantly and I am getting sick and tired of it. Why is this always needed in manga? Hopefully it will be over next volume.

Volume 8: 2 stars. Urgh, the rival stuff continues, and it gets highly annoying. Really, can that girl just disappear magically or something? Bah, acting like that. Poor Hibiki, almost not able to visit Itou because of that girl being there like a stalker. Also who the hell tries to kiss a guy, a teacher even, when you know he has a girlfriend? What kind of disgusting piece of poo are you? Bah. Go away. Leave. Thanks to you Itou has gotten into trouble. At least Hibiki understands that she can’t be seen that much with the teacher, but this girl is clearly out to get him fired. 😐
There were a few cute Hibiki x Itou moments and I am treasuring and hoarding them like crazy because they already don’t happen often, but with this rival added happen even less. 😐
I also didn’t get why he just gave his costume away, did he really think she would just shut up and stop stalking? HAHAHHAHHAHA. Funny.
Then we have Kosuke and his problems, I did feel sorry for him. He doesn’t deserve that, and I dislike the girl for toying with him. Acting all sweet and kind, and the next day back to her teacher mode. Meh.
So all in all, not really my favourite of volumes. I hope the next volume ditches that stalker girl, and gets back to being normal

Volume 9: 2 stars. URGHHHHHHHH, can the stalker girl just go and vanish already? I know I keep saying it, but she is really ruining the series for me. She is a total bitch about everything. I am just disgusted by this character. She is also really manipulative going after Nagisa like that and making it seem like she knew about the relationship so he would tell her. 😐 Bah.
The date (he is so sweet towards her and he really cares, they make a cute couple), the trip (loved how Kosuke found out why Chigusa and Nagisa were so hyped to go on a trip and what he did then, plus there were lots of sweet moments between Itou and Hibiki), the background story on our female teacher, and also Chigusa x Nagisa is really great, but yeah. I can’t rate this one very high.
I am guessing we will be seeing more of stalker-girl soon, though I do hope that she will vanish soon, I just can’t stand reading it any further otherwise. 🙁
Though I have to say one thing more: I JUST LOVE THE COVER! Squeee!

Volume 10: 3 stars. flips several tables Once again the focus in this volume is the stalker/bitch girl. This time she is going after Nagisa because Nagisa is feeling lonelywonely and can’t handle that his girlfriend actually has to study to get anywhere in life. And yes, she should balance it a bit more, but really, isn’t it already admirable that she is studying so much? That she found a purpose? Can’t you just talk normally to her, instead of fighting and getting angry all the time? Arghhh. And then you go out with another girl, just like that? Let her touch you, let her get close? And you think that is normal. NEWS FLASH: No just no.
The stalker/bitch girl is just terrible. Trying to break up friends and happiness like that, and then also propose that thing to Hibiki. Which of course she does, because she can’t choose (poor girl, her life isn’t always the easiest). Luckily, Itou isn’t that easily fooled and goes to find her (Awwwww, so sweet!) and talks to her.
The volume ends on a cliffhanger (argghhhh). Thankfully I am not feeling that well so I will just keep on reading, as I want to read see if stalker girl will leave the building.