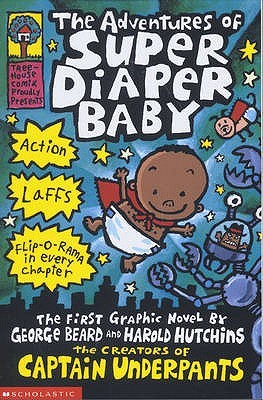 I read Captain Underpants and the Attack of the Talking Toilets last year, and I decided to now check out the new series of Diaper Baby.

I have to say I think I will be sticking to Captain Underpants. This book was quite disgusting, and yes, I know it was written exactly to be that, but I don’t really need to see a giant turd wandering around, ewwww. I am glad no one was around when I read this one. Otherwise I would have had some explaining to do as to why I am reading about poop.

I had quite a laugh though that the boys from Captain Underpants wrote this one instead of what they were supposed to write.

The baby was quite nice though, that is why I kept reading as I was curious about him, what would he achieve next? Would he defeat this villain? What about his parents, how do they feel about their son being a superhero (especially at this young age).

The dog, well in the beginning I didn’t like him much, but later on I did quite like him and I was happy with the change he went through. Yay!

The art was also pretty decent.

I also got a bit annoyed at the misspelled words. I know this was written to seem like a kid made this, but was it really necessary? I can just imagine that it might also confuse kids who just started reading.

I did feel sorry for Captain Underpants in this one. Several days must have passed, so why didn’t anyone help him out?