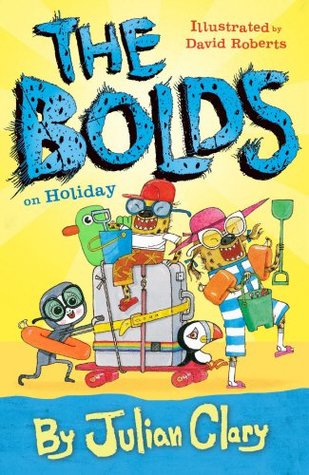 5+ stars. Squeee, this was absolutely wonderful, fun, delightful! Another fabulous addition to this great series.

I first had the paperback pre-ordered, naively thinking that, since the other paperbacks were released at the same time as the hardcover, this one would be as well. Nope. When I finally when to check again, I came on the hardcover edition on amazon and found out it was released 6 months before the paperback…………… 😐 Luckily, the hardcover wasn’t expensive so I immediately bought it. And boy I am glad I did. Because I wouldn’t have wanted to wait another 6 months for this one. It was just too much fun to read and I laughed myself silly (and not only because of the book, but also because reading the jokes from the book to my boyfriend makes him have silly faces).

There is a lot of things happening in this book, from a sports-meet (they do sound so much fun, I wish we had them here) to a wounded leg, to dogs, to holidays, to dognappers, to reading about new friends, there was just so much going on and I couldn’t stop reading until I was done with the book.

There was one thing that I found a bit weird. While I did like that Bobby got to be the dog (he seemed to really like it, for most of the times, plus it was cute), I did wonder why they didn’t just get crutches? Or a wheelchair? If they want to adapt to the human society that would be your number 1 pick. And not change your son to a dog and hope no one notices how much alike they are (though that didn’t seem to happen, which was all sorts of magics).

The sports-meet was a delight, and I loved seeing the twins have a jolly good time, plus I was cheering really loud when Bobby decided to do that. Go go Bobby! That is definitely a good thing to do, show him what you can do. Show him your hyena side.
I did feel sorry for Minnie’s dad though, he did all that effort to make food and then that happens. At least they left a bit for Minnie and the twins, but I did found it a bit rude of them. I know they are animals, but really, how are they resisting these urges while shopping? You can’t just get away with shoplifting all the meat or other yummy food.

The holiday, aka camping in Cornwall, it was so much fun. I was delighted for the twins to finally meet the sea, but I also laughed myself silly over the fact that the Bolds didn’t know how to put up a tent (why would you ask for instructions), that they eventually slept in their suitcases (because they forgot their sleeping bags). That Fred Bold just wandered around in a bright speedo like stuff and didn’t care that all the ladies were screaming at the sight. 😛 It was so much fun to see how his wife immediately jumped to his defence when she heard what was being said about her husband.
And then there are a ton of other fun things that happened during the vacation, but I will keep those secret.

Bobby and his doggieness was adorable, it was a bit awkward at times (because again, why not crutches or wheelchairs), but generally I loved it as it showed us a new side to Bobby. His wild side that is. We saw how much more happy he was being free and being able to just do what he wanted whenever he wanted.

The kidnapping, and all that happened surrounding that? Wonderful! It also brought a whole slew of new characters. It seems everyone knows the Bolds and is more than willing to help them out. The culprit? Creepy, very creepy. A bit of Cruella, just without the killing. But I think if she and Cruella would meet over tea they would quickly become good friends. 😛

The jokes (and limericks) were a delight, I laughed myself silly, and again, I also enjoyed telling to my boyfriend, he makes the best faces. Then again, the jokes are pretty terrible, not in a bad way, but in the way that they will make you groan, laugh, and shake your head. How did anyone come up with these?

Of course the book is full of fun illustrations, and I still love the style. How the characters are drawn, but also how everything else is drawn. You can easily see that they are hyenas, and that makes you wonder why no one else notices. 😛

I think I have mentioned everything I wanted to mention. It was a delightful book, and I hope that there will be many more Bold books in the future, I wouldn’t want this series to stop already, it is too good. Highly recommended if you want to laugh yourself silly.