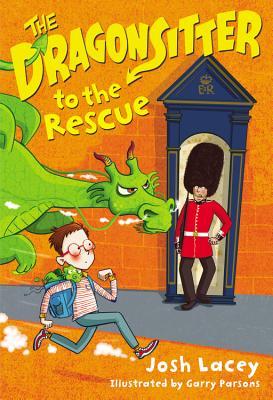 My library finally had another book in this series in their collection, too bad it is book 6 (which I found out when I got home to add the book to GR), and not book 2 to 5. 😛

This review will consist of parts from my Book 1 review. Why? Because I still highly agree with them. I will add some new comments to my old comments. Bold = old. New = normal.

So in this book we are going to London, and our dragons (I cannot remember if we had two before, I thought there was only one) are coming along. You can imagine what that might entail, though in the end it all wasn’t that bad. I thought there would be more breaking and stuff, more like what the dragon did in the first book (if that is still the same one, they do seem so different, argh, library why can’t you just buy books the normal way). One of the dragons disappears, and for most of the book it is about the whereabouts of the little guy.

I hated the father, really I did. Sure, he was somewhat right (as stuff do happen), and I was kind of nodding along at some points (because really that uncle is just an idiot), but at times I found him to be quite a bit too rude and mean. Even when the dragons did nothing he was still being a bully.

I loved the fact that the book took place in London, one of the cities I still want to visit. It was great fun to see them wander through the city, going on the EYE, going to museums.

I did like that the book was written in emails, instead of the normal way of narrating we have a email a day to Morton, detailing what happened that day and what the dragon did. Nearing the end we finally have the mysterious uncle emailing back. Though it was a bit strange that he never could have thought to check his mail. I mean, you leave your DRAGON with your family and you don’t care to check your mail to see if they have any questions? Or that they need help?
Yep, still loved that this book was emails, and one lone postcard. However, I didn’t really like that the uncle was again MIA for most. He replied maybe once or twice, but with nothing really good. Why did he go to such a place of nothingness while he knew that his family was going to travel? Why did he leave the dragons in the care of his nephew? Why isn’t he caring for the dragons himself. Sorry, but I just think it is all really weird.

Also what is up with the responses of people when they are called about a dragon? I know dragons are rare, but seriously, apparently not so rare if someone has them and even says there are more of them. Why didn’t they even care to take a look? Just pass by, if it is nothing, then it is nothing and you just go back to work, otherwise you have a fun meeting with a big dragon. I can imagine that if dragons are normally not kept as pets it might be a bit weird, but in this case, apparently there is someone (and probably more people) keeping these as a pet.
Maybe just me, but I just thought it weird.
Yep, again, this happens in this book as well, and it just kind of stood out. No one would believe them when they would ask for help. No one believed them when the dragons were just flying about. Yes, right over everyone’s head, but did anyone believe it? No. What? That is just weird as hell. Even later they didn’t get that they had a dragon on hands. I have no clue how this works. How can there be dragons, even more than 1, and people keeping them as a sort of pet, and yet so much disbelief? What?

Also what is Uncle Morton’s job? He got money, he got a dragon, he got everything. I am kind of curious about what he does.
Yep, still wondering about his job. Is he a monsterhunter? Since he is now hunting/searching for the Yeti.

The illustrations were really great, and I loved them so much. They made the story come to life, and also kept me reading. Yes, I would have stopped reading if the book didn’t have any fun illustrations.

All in all, a bit weird of a book. We had some dragon trouble (seems that dragons just need to escape, or break stuff), we had some annoying dad stuff, then there was the whole no one believes in dragons even though they are flying around. But there were also fun illustrations, it featured London, the formatting of the book was fun. But would I recommend it? Eh, I am not sure.