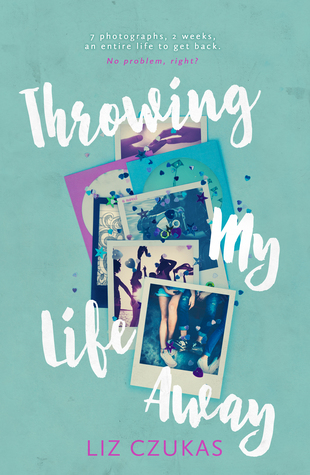 Liz Czukas did it again! Another book, another epic story.

The review may be a bit chaotic, sorry, my emotions are still running all over the place.

Mariska was such a fun, lovable character. A tiny bit overdramatic, then again I think I would also flip out if someone would throw away all my memories. From pictures to movie stubs, to negatives. She lost everything. Luckily for her she lives in the digital age and thus a lot of her pictures were still findable thanks to friends having them. It would be a different angle, so a slightly different photograph, but still it is something. I know my childhood pictures would just be lost if they were destroyed. 😐

Plus in the end she really only had 7 photographs she could never get back, and I was like, and that what all the drama is about? It just seemed a bit silly that she was being so dramatic over 7 pictures. I know she lost much more, but the focus of the book is on those 7 precious photographs. One is of her biological dad (and that was truly the only one I found important since she never seen her dad, her mom had a one-night stand). But after a while I started to want to see her get all those photographs again. I wanted to see how she would get all her pictures back. I was rooting for her to get the pictures. Or at least find a way to reproduce them in a way.

And that she did. The first picture was still pretty much a reproduction of the old one, but the rest was them finding something different, yet still the same in a way. For instance instead of clown soccer (a fun event that they stumbled upon) they tried to make something that would evoke the same emotions, not only with them, but also with others. Their idea was oh so much fun, I wish I could have seen a picture or video of that.

The other events that they did were also a delight.

Caine, ah Caine. He was so adorable, and I was shipping Mariska and Caine from the start. They just made the perfect couple, and I was hoping they would get together. Their back-forth play with the yearbooks had me laugh so hard, plus I was just going kyaa every time one of them brought the books back in a sneaky way.
Sure, I had some moments that I wasn’t sure about Caine, at times I found him a bit pushy, especially regarding keeping memorabilia. Sorry to hear about what happened in your past, but that is no need to be rude towards those that do value those things.
But as the story went on he did change, he started to open up a bit more, started to be more interested in keeping something to remember.

Mariska’s best friend was one of my favourite characters in the book. She was just so much fun, so interesting, and also so hilarious. It was also sweet of her to help out her friend so much, and be there for her when it was needed. Oh, you need to do a road trip of 5 hours to see x? Sure, girl, let me just grab some stuff, and I am there. 😛

I was a bit surprised at the stepfather, that he didn’t even care to ask. That he just immediately thought everything had to go…. How big of an idiot are you? Sure it is an honest mistake, but really? It could have been prevented.

I had a problem with Mariska’s attitude towards her mother. I found her too rude, too mean. Yes, at times I was also a bit annoyed with the mom’s attitude towards memories, towards her house (really is it needed to keep on renovating, and even going so far that your daughter’s memories of the place are that it is so often chaos and a mess?). But I also liked the mom, and while my opinion is a bit different, I could see that the mom still cared about memories, still cared about keeping stuff. I wasn’t surprised when x happened. It was a fun surprise to Mariska though. 😛

We don’t have yearbooks here, but holy moly, who would spend 75 euro on a book? o.0 That just really surprised me when we heard the price, and how much it would cost in total to get 4 yearbooks back…

The ending to the book was adorable, and I was really happy with how it ended.