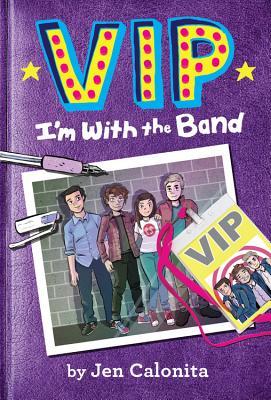 Before I start with all the good stuff, I want to mention that the blurb is pretty much lying. She doesn’t really see the guys as her brothers, her love interest is just moving to another boy, because she finds out Zander isn’t what she thought he was, and she finds that, and more, in another member.
Secondly, that part about the band breaking up? Over an argument? Mac having to save them? Try page 280, which is practically the end of the book considering the book stops at around page 320/330. 😐
Such a shame. I am still happy I read the book, but yeah, my expectations were slightly different thanks to the blurb.

Now to the good stuff, because there is a lot of good.

First up Mac, or Mackenzie. She is a supersweet, cute, cool 12-year old girl who loves Perfect Storm and gets the chance of her lifetime when her mom (who works with bands/artists) becomes the tour manager of Mac’s fav band. I loved how Mac was first totally fangirling, but later on started to get more comfortable with the band, and with everything that involves them. She could talk more normally to them, and they to her. It was a relief to see her change. I was a bit worried that she might be stuck in fangirl mode the whole tour. Not that such a thing would be that bad, but I was definitely looking forward to her interacting with the guys, and not just stammer and shake a can of energy drink and spray it all over her favourite guy (and yes, this happened).
I loved how creative she was, and it was great fun seeing her drawings pop up all over the place. My favourite would definitely be her comics. Yes, there are comics spread throughout the book, not a lot, but I didn’t mind, each time I saw one I was squealing in delight.
Her shift from one boy to the other was all right with me, it wasn’t an immediate switch, no, it was gradually done, and I was squeeing and cheering for these two. They make a cute couple, and I hope they will get together in the next book. Though I guess Mac’s mom wouldn’t be happy with it, but oh well, all for the greater good of shipping these two together.
It was fun to see how well she and Jilly matched. I was worried at first that they might not go together, but from the start I knew this would be a true friendship, just like Mac had with her other friends Scarlet and Iris.
I was cheering for Mac during the Lola parts. My word, Lola was annoying. Luckily Mac isn’t one to just stand there and let it happen, she really stood up for herself. Go girl! Yay!
It was definitely fun to see Mac also loving comics, and also fangirling about them. 🙂
The author definitely did a great job at writing Mac. I could definitely believe this girl was 12. This may sound weird, but I have read enough books that had a character as x age but it never felt like they were that age. But not with Mac, oh no, she gave off 12-year old vibes. I am not sure how to explain it correctly, but she felt like how I was when I was 12.

I could go on and on about Mac, but I think I got most of the important parts mentioned.

Now for the boyband.

I just couldn’t see what everyone was liking about Zander. He was cute, and he was nice, but he was also a player, and wanted all the attention. Sure, we do see some sweet moments, but at times I really just wanted to smack him on his head for being such a prick. Like when he invited Mac for a pool date, and just invited the entire fanbase, and didn’t even make the food he promised he would make. That is just one example, but I have a few others. I can imagine why Mac may have changed her feelings from that boy to another one. Every girl loves him, but they don’t know him. Not really, and Mac is really getting closer with him.
And again, he is a sweet guy, but I can’t see him go with just one girl in the future.

Heath, my favourite of the whole bunch, I loved how energetic, fun, happy he was. His fake tattoos were cute, I do wonder if, when he is old enough, he will be taking real tattoos, or if he will just keep his sleeves.
I loved how sweet he was with his siblings, and the whipped cream fight was just absolute brilliance.

Kyle, ah, Kyle. My second favourite of the band, well as soon as he started opening up a bit. Then I could see that he wasn’t that cold, but instead was a sweet guy with a love for comics. Out of the guys he was also the sweetest with Mac. He really helped her out some times.

I am sure you want to know who Mac picked. Hehehe, I won’t tell you that. Oh no, you will just have to read the book yourself, my lips are sealed. The only thing I will tell you that I was already hoping she would pick that guy. He was a much better match.

Then we have Jilly, Iris, Scarlet. Mac’s three friends, and I loved all three of them. Iris and Scarlet were exactly like Mac with their fangirling, and it was adorable when they visited in a later part of the book. I already missed these girls, so it was fun to see them go completely bonkers about the band (just like Mac had in the beginning).
Jilly, the only one who doesn’t really care about the band (or at least not in a fangirl way). I immediately took a liking to her, and she stayed a sweet, supporting girl the entire book.

Mac’s mom was also really cool, I loved how caring she was, but how she was also strict when it was needed. She was always there for Mac, well, whenever she had a moment in between her busy schedule. She never neglected Mac, she always made sure to make some time for Mac if needed, and she always made sure to do something fun with Mac during her moments off.
Of course at times she was a bit too strict for me, then again, it doesn’t help if Mac is protecting people instead of just being honest about stuff. I still wish Mac would just have been honest at the end of the book about certain events.

The tour, the trips through the country, it was so much fun to read. I loved seeing the sights that our guys and Mac and Jilly saw. It was fun to see Mac learn all sorts of things about touring, and how she got more and more experienced with how to handle a band and how to do stuff.
The concerts and the meet-greets were also a delight to read. It was fun to see how craycray the fans at times were, and I loved to see how the boys handled that. They did a tremendous job at being sweet and caring.

We also see the band practises songs, finding a new song, and I was happy we were able to see that process as well. How they also wanted feedback from others, and how Mac really helped out due to a certain thing she mentioned.

The illustrations were top-notch, and I loved them all. I was already hoping the book would be filled with them, but I never expected so many and also comics! The style of the drawings was perfect, and I actually found out the illustrator also made Henchgirl, a book that I got pre-ordered. 😛 I was already wondering why the artstyle was so similar.

Phew, I think I have everything I wanted to write. This book was 100% adorbs! It is a book that will make you laugh, will make you squee. You will be going on tour with one of the cutest newest bands in the book universe: Perfect Storm. Be sure to read this one! I would highly recommend it!