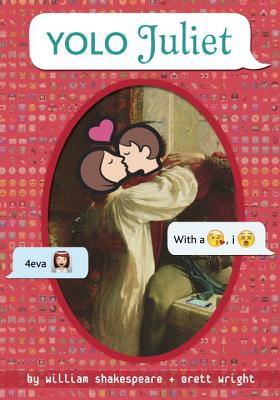 Eh, it was OK. Not something I would normally read (mostly due to the text speak/emoji stuff), but I wanted to try it out. Definitely happy I tried. Won’t be reading the other books in this series though.

I used to be quite a big fan of Shakespeare, but just like with a lot of books in that category, thanks to high school I just didn’t like those books, or anything to do with mandatory reading, anymore. Yay, thanks school!

But when I spotted these text speak/emoji stuff books I just wanted to try them out. Maybe I could like Shakespeare again? Maybe I wouldn’t fall asleep (like what happened whenever I tried to read Shakespeare the last few years).
I am not a big fan of text speak myself (and I am still quite young, but I just prefer typing words the correct way). I know most of the abbreviations, but some, never heard of them, so I had to look them up. It is quite nice that they added a list at the back, but that is just not going to work when one is reading on a Kindle.

I have to say the Romeo x Juliet story was even more dramatic now. It was already a pretty much over the top play, but with the smartphones, the clear view that these are teenagers? Drama +++. Not that it is bad, if anything it did make it better.
However, and since it has been long I don’t remember the entire play, it did seem like there were parts that were missing. I guess those weren’t interesting? However at times it was a bit confusing and hopscotchy. One moment x happens, and then y already is presenting itself without any introduction.

The whole book is texts/events. It is definitely a refreshing way to get the story presented.

I found one plot hole. Everyone in this place has a smartphone, everyone can chat with each other, YET when an important part happens they go out to send a letter? Per person? Ehhhhh? I know the book is following the script, but yeah, this just seemed highly odd. Especially since it was such an important letter. Why not just send a mail or a text or a whatsapp? Letter sending is all OK, but for such an important thing you would just think they would do it the way I mentioned (texting/mailing/whatsapp)?

All in all though I did get bored, but hey, at least I didn’t fall asleep, progress! Plus as I said, I am really happy I tried these out!