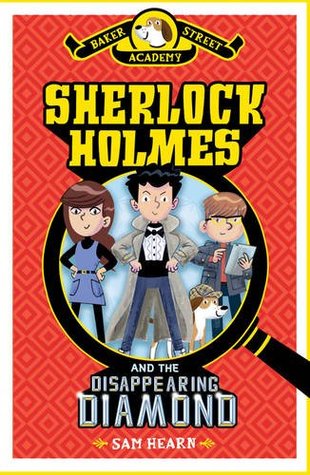 I came across this book and just needed to have it. It seemed so fun, from the preview online I could see it had comics, illustrations and much more.

So I immediately bought it, and after a few days it got delivered. And now I finally had a chance to read it. And I quite loved it.

I just had the same problem I always have with Sherlock books. The Sherlock character is terrible. Horrible. Excruciating. Frustrating. Too smart for his own good. It is just not the character type I like. It is OK if you are smart, or if you are able to do awesome stuff, but no need to get cocky about it or act like you are so super-special and everyone else is lesser. And then when you explain them stuff you act like they are 3-years old. Bleh! So yeah, I had a few times that I wanted to just stop reading, but I kept going because of John and Martha. And also because of the great story and mystery.

Yes, John our main character was a terrific character. At times I wish he would stand up for himself a bit more (like when Sherlock keeps stealing his ipad), but in general he had a great head on his shoulders. I also loved his stories, his articles, and he was a good artist. Of course he was also smart, just in a different way from Sherlock. It was quite interesting to see how much those 2 differ and at times totally didn’t seem a good match, but still became good friends.
John was definitely my favourite character.

But he is followed closely by Martha. She was such a fun character, and I loved her personality. She knows how the handle Sherlock and I admire that of her. Not many people can handle that guy, but she does it like a pro, even shuts him up at times when he is going on and on again about something or another.

There are lots of references to Sherlock Holmes and other detectives. We even have a Moriarty walking around and acting all bad boy. Though I could also see another side to him a bit further in the book. He has quite a family line, and it causes a bit of a pressure on him.

The mystery, and what happened to the jewel? I really liked it, I didn’t expect that to have happened, I had all sorts of theories, and I knew where the jewel was when the hints were dropped, but the actual plan, or why it was stolen? Nope.
I did like that there was a flash mob (dancing!), that is sure a great plan to distract everyone.

The book is also delightful in how it is designed. You have comics, illustrations, talks illustrated, and much much more, you never knew what would happen on the next page. Would it be just text? Would it be a comic? Would it be something different?

The ending was pretty good, and I quite liked that they let Sherlock explain some stuff, of course I knew already how he deduced those things, but eh, still fun.

So all in all, with the exception of Sherlock, I loved the book! And I would recommend it to everyone.