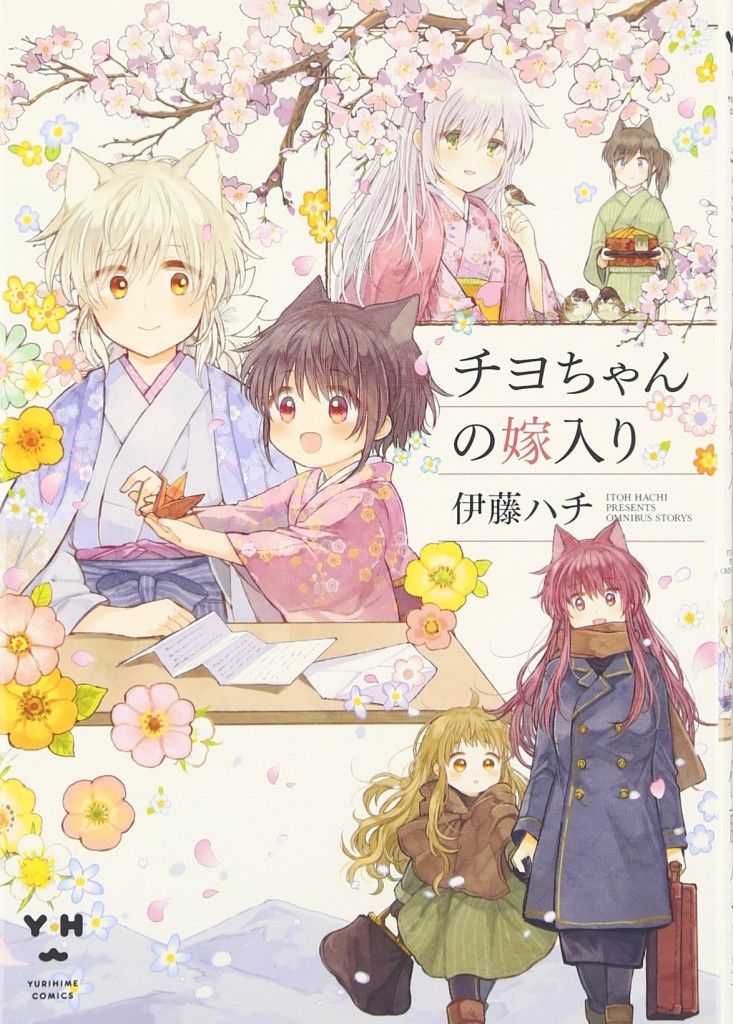 A cute story collection with 3 couples and lots of love, sweetness, and adorableness.

This comic contains 3 one shots/stories. They are set in the same world. A world with animal-eared people, and a world that (from the notes) allows same-sex marriage (yay!).

1. Shuujuu Yuri Hon: 5 stars! This was absolutely adorable. I was shipping these two from the moment we met them, and I was squeeing throughout most of the book. Of course I was also a bit sad, because of Ritsu’s mistress and what was going on with her. I cried a few times when the sickness got worse, but I also cried near the end, just for different reasons.
I wouldn’t mind seeing this manga from the other girl’s (mistress) side. We could already see how much she was improving every day due to Ritsu’s love and care, but I wouldn’t mind seeing it from her eyes.
The art is really beautiful! The art is soft, sweet, and fits perfectly with this love story.
This story isn’t long (just 56), but it was just perfection. You don’t have the feeling you miss anything, and everything is neatly sorted out in the end (though I won’t tell you how, you will just have to read it).

2. Haru ni Furu Yuki: 4.5 stars. I was pretty pissed off at the researcher girl at the beginning. You can clearly see that Shiro is afraid, she clearly says no, she clearly doesn’t want you to come closer, but what do you do? Get closer and act like a complete creep. 😐 I can imagine the researcher girl is excited, but this not what you want to do. 😐
But the story is pretty interesting, I was quite surprised because of Shiro as well, everyone has ears (well special ears), but she doesn’t. Just like the researcher girl I wanted to know more about her. I didn’t even realise (due to this being my second story in this world) that it was rare for there to be non-special-eared people around. It really expands the world, though I do feel so sorry for this little girl who has been always alone due to her not having those special ears. 🙁 But it seems that those without the special ears do have something extra, they have a power.
We slowly find out what is going on with the village, and also with Shiro and her powers.
The ending brought tears to my eyes. It seems that is going to be trend with these stories. The first one made me cry, and the second one as well. What will the third story bring?

3. Chiyo-chan no Yomeiri: 2 stars. Nope, no tears here. A bit too short, plus I also found it a bit, OK a lot, creepy that Chi-chan, who is 26 (given that it was stated at the beginning that Chi-chan was 15 years older than Chiyo), loves and wants as a wife, an 11-year old. Whut? No. No, just no. To be honest I was already a bit worried about this (due to the title and the obsession of Chiyo), but I was hoping that it wouldn’t happen, just like how the previous story didn’t go any further with the love part.
At first it was pretty cute, but when x happened, I was just NOPING my way out of the story.
Also the art wasn’t as pretty as it was in the previous stories. It felt rushed, unfinished. You could see the potential was there.
It is such a shame, as the art is one of my favourite things from these stories.

All in all, still I quite enjoyed these stories, and I will check out the artist’s other works. I am quite curious what else they have written/drawn.