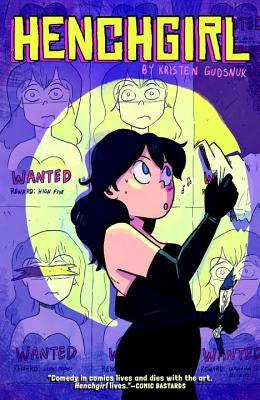 One of my most anticipated reads for the year 2017, and it definitely delivered!

This will just be a short review to express my feelings.

I have to say that at times it was a bit confusing, some events happening that didn’t really make sense (then again, the whole story was a bit over the top at times), or the time line that just passed by wonky. But eventually I found a flow and I went with it and really enjoyed the book.

I just loved Mary, and I loved how she tried to be a good henchgirl, but just kept failing. At first I was confused why anyone would become a henchgirl, and then especially why does anyone continue while they are so terrible at it. We do later find out why she went this path, and I loved that it was added. I can imagine that she might turned to the evil path. Though she does have a superpower, at least in my eyes, she is super-strong. Stronger than normal humans, even if they went through power training.
But it was fun to see her be evil, but also not want to be evil too much. She was OK with robbing the rich (Robin Hood much?) but didn’t want to rob orphans. It caused some moral dilemma’s for her. Would she betray x and y? And what else does one do when one isn’t being a criminal and a part of the gang?
Later on when x happened to Mary… well I have to say that on the one hand I liked this Mary, on the other hand not so much. It was quite fun to see her like this (she was just so evil + a dare devil), but I was also worried for her. Would she ever become her normal self again?

It was definitely fun to see how Mary balanced her gang life/criminal life, and her normal day life with her 2 roommates, a guy she likes, and trying to find a job. Often books about criminals just show them being a criminal all the time, but with Mary you could see a totally different girl. In looks and in her attitude.

I loved her roommates, especially the one with the carrot powers was awesome (though really, I would have the same reactions as her friends when they found out what the carrot cake they just ate was made from).

Then there was a lot more happening, and I loved that as well. Really, so much happened in this book and I just felt like I was in a rollercoaster of awesomeness.

The art was pretty awesome (then again I didn’t expect anything different since I have loved Kristen Gudsnuk’s art for some time now).

I also liked the little short comics at the end, they cleared up some things and they made some stories even more complete.

I would definitely recommend this one. You won’t be bored, instead be prepared for a wild rollercoaster ride (or another wild ride of your choice).