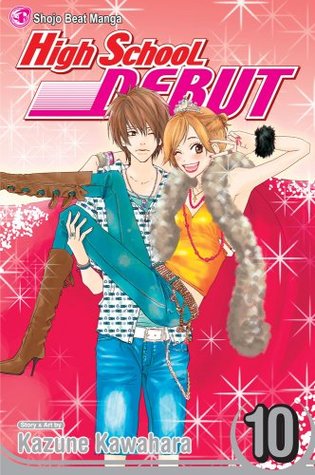 I finally was able to get the last two 3-in-1 volumes so I can now finally finish this series. I am all hyper about it!

So this volume meant the end of the school sports festival, and also the end of that crappy OMG I suddenly like your girlfriend and will do x and y and let’s battle stuff. I am really getting tired of seeing that trope in manga and anime. You are his best friend, you can’t just try to steal away his girlfriend, that is just rude. 😐
So I was happy to see it end, though I have a feeling we might get a bit more later on, there are certain hints to it. Of course I am hoping the author won’t go there any more, and just focus on our cute couple!

Yoh also meets Haruna’s family, and oh my lord, I was just cringing all the time. Those parents clearly didn’t get that the two wanted to be alone, instead kept on jumping in, screaming at them if Yoh wanted x or y, and so on. I just wish the parents could have left them alone. I was quite happy and swoony during that bath scene and the talk between Yoh and Haruna’s father. That was quite sweet. I am sure dad already liked Yoh, but that his like for Yoh went up after this conversation.
But yeah, I was looking forward to some sweet romance, and instead we got this cringefest. Such a shame. 🙁

Lastly summer is here, and Yoh is going for summer courses, which means that he and Haruna can’t meet up too often (and also means her plans for vacation are going down the drain). Then we also have the addition of a new character, and I disliked her instantly. And, duh, we get a whole boohoo backstory on why she became this character, but really? I was just pissed off at her attitude and how she is being rude and demeaning to everyone around her no matter what. She doesn’t even give them a chance.
I was happy to see her brother (someone we already know) though, and that we are getting to see him more and learn more about his life. Quite interesting to see how the author turned that side character into someone a bit more important.
Ouch, naturally this volume ends on a cliffhanger. Bleh. Oh well, luckily I got all the volumes so I can just read on, otherwise I would surely have rage quit on a lot of things. 😛

I am hoping that this crappy character leaves or changes in the next volume + I am also hoping for a bit more romance between Haruna and Yoh (that one kiss wasn’t enough for me).