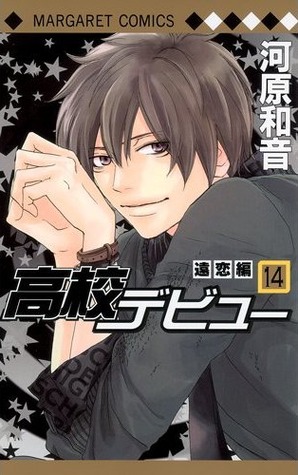 OK…. so these two volumes are about their 1-year long-distance relationship? It is even aptly called High School Debut Long-Distance Love.

It is quite interesting that the author decided to add 2 more volumes to the series. However there were inconsistencies. For instance if they keep seeing each other, and add to that texting and calling, why was he so surprised about her having long hair? I mean, hair just doesn’t get that long magically, so it must mean they haven’t seen each other for quite a long time. Ummmm?

Also while I am happy we have a chance to see them in this year, I am also not too happy, I don’t know why. I feel this would have been better as a separate series, just like how Nodame Cantabile has 2 extra volumes separate from the main series. Especially considering the ending in volume 13, it would have been much better that way.

But the volume was quite good, though I did want to bop Haruna on the head a few times. Giving away your ticket for that is quite nice of you, but didn’t you think that maybe your boyfriend wanted to see you? And wasn’t all too happy to have to wait even longer to see you? It was just too typical for Haruna to do this, and I should be used to it, but still, eh. I just felt it was rude towards Yoh.

I really didn’t like the boss in the first parts of the story. What a rude guy he is, you just don’t say such things to the people who work with you. You may be the boss, but that doesn’t give you permission to just burn them to the ground with those words. 😐

It was quite cute how badly Haruna wanted to do stuff with Yoh, but again, like with all the other volumes, it seems they never get a chance. Yoh is pretty sweet about it, though I would love to know what he is really feeling. I am sure he also must have some feelings about the subject.

I loved that Haruna is working hard to get to Tokyo next year. She is really studying and finding options. I do wonder what happened to her gym teacher/sport stuff, in this one it seemed she was going for English and deciding to be very close to Yoh. Which is not bad, but I was really enthusiastic about her finding a career path and her going for that.

Of course the author has to add yet another rival to the mix. I hated the guy from the start, and all his actions (and what he did to Haruna) were despicable. Haruna is pretty forgiving, but I wouldn’t have minded seeing her get real pissed at the guy and not forgive him. He may have jeopardised your future, you are allowed to get angry girl. No need to hold back.

All in all, a pretty decent volume, though a bit confusing considering I read this one directly after that concluding volume 13.