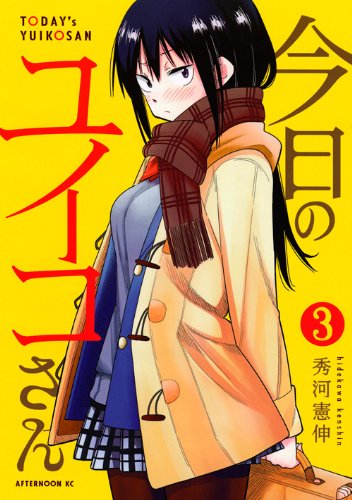 So I decided to finish this series now that it is finished. Quite curious to see if I still like it after a year (I know I had some problems back then with Yuik).

I wrote a short review for each of these volumes and I will post them here.

Volume 3: 2.5 stars. Eh, eh, and eh, that is pretty much my feeling for this volume. After almost a year I decided to go for this one again, it is now finished so I can finish this series. But really, what was the me of a year thinking? How did I even develop a soft spot for this manga?
I was just so frustrated with Yuiko’s hot cold hot cold attitude. She is just not honest with her boyfriend. There were a few parts that had her showing some honesty, and the last pages especially were great and I was happy that it FINALLY happened. But yeah, she is constantly being a bitch towards her boyfriend. Constantly snapping at him, pushing him, telling him off, and much more. How can he stand being with her? For the few moments in between when she is finally honest? sighs I much preferred the 2 or so chapters that had other people (probably from their class) and their romance.
I definitely liked the Culture Festival and what happened there. It was awesome that they were able to use the Kendo Hall and turn it into an epic event.
2.5 stars, and that is mostly because of those last pages of this volume, they were just perfect and I even noticed I teared up because FINALLY!
I just have two more volumes to read, so I guess I will continue, hoping that it will get better again.

Volume 4: 4.5 stars. Ah, I can see why the me of a year ago liked this! This volume was so much better than the previous one. She was still super deredere, but less, she actually tried her best to be better in communicating. They really talked in this one, about a lot of things, and it was just so sweet that they are able to talk like this. A lot of teens would just have broken up, but these two just keep on going!
It is also Christmas and Yuiko is working hard to get some money because she spend everything on presents for her boyfriend. I loved that even though it was a bit tough and she was dead-tired she kept going on, that is really awesome. Yuiko is really growing, though it is going slow.
I also loved the talk near the end, Tomoya is finally honest about how he is feeling about, um, well certain stuff you do as a couple. Not only kissing, but he also told her that he wants to do more and that he will try his best to keep it all in. That he will respect her and wait for her to be ready. Awwww, so sweet!
Well the next volume is the last. I am quite curious as to how this one will end, it feels like it could go on for a bit longer, so I want to see what the author did with the ending. I am hoping it won’t be rushed. crosses fingers
Plus I am hoping for more kissing!

Volume 5: 3.5 stars. Yep, what I was worried for in the previous volume happened. The ending was rushed, and I hated it so much. There was so much potential, but the author/mangaka pulled that kind of thing, and then, done. Whut? They had some problems in this volume (mainly with Yuiko being totally obsessed with her new friends and not giving a lot of love towards Tomoya), and I was hoping this would get resolved, but not in this way. Bleh.
Time also seemed to move extra fast. 😐
So yeah, this was just a disappointment.
Still it was a good series, and I did quite enjoy it often. Yuiko had her cute moments, and I loved seeing her grow to be less deredere and more friendly. She also seems to come out of her shell and make friends.
I loved seeing her and Tomoya together, it was often awkward, but they did make a cute couple and I will keep on rooting for them.
The art was pretty great, though at some times it could have better (especially during the more emotional parts).