A cute story featuring bunnies, cowboys, baddies, and of course the most important thing, friendship! 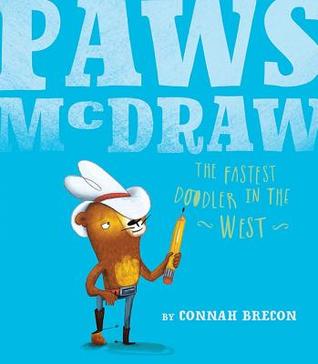 I just knew I was going to like this one when I spotted it at the library. Cowboys? Check! Magic elements? Check! Cuteness? Check! Good illustrations? Check!

The story is about a cowboy named Paws McDraw, he has the magical ability to doodle and draw things to real life. What this means is that he can save people, for instance that one time when a train was hurtling to certain death because the tracks were gone. Paw just drew them back (of course not forgetting the details). I loved the fact that he lived in a town with bunnies. Really, bunnies. They were everywhere and I had a laugh when we saw the city limits sign with the number crossed out and just a lot next to it. 😛

Paws is the local hero and he loves telling stories. I quite liked Paws. At first I was a bit worried that he might turn out to be terrible, you know how fame sometimes gets to your head? Well that doesn’t happen with Paws. Not even when baddies turn up and he finds out he needs more than just himself to save the town. He never falters, he just keeps going, figuring out a new way to save the day. He doesn’t mind sharing the spotlight.

The villains were real villains, and I was quite excited to see them and the ensuing battle, it was all exciting to see what would happen, would our villains be captured? Or would they be able to run around freely?

The illustrations are quite good, the style fits with the book quite well.

All in all, a fun book about the Wild West, just now with some magical doodling abilities added!