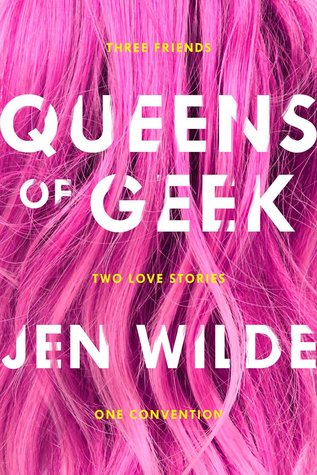 OMG OMG OMG OMG flails and squees This book was perfection! This book is going in my favourite books of all time list! <3 <3 <3

Sorry if this review is a bit chaotic, I am still experiencing all the feels from this book.

We have 2 MCs, I was thinking it would be three, since we also have Jamie in the party, but he doesn’t get any of the spotlight (which isn’t so weird given that he is with Taylor all the time and it would just become boring if they also added his POV). I loved both girls instantly. I am not sure how to explain, but they both just struck a chord with me. Later Taylor became even more of a favourite of mine.

And that had to do with how her mind worked, how close that was to mine. I am not as anxious as she is, but I do know the feeling of having to go out, being in a crowd, talking to people, her boyfriend problems, and so much more. Later we find out why Taylor is like this, and I could connect to her even more. It was absolutely fabulous, it doesn’t often happen that I can connect to a character on this level.
Add to that the fact she is, just like me, a total geek, and that she can totally fangirl about something that she holds dear. I was just squeeing with her!

Then we have Charlie and while at first I thought she was a guy (sorry, her name, I just don’t hear it on girls that often). 😛 I really liked how hard she worked, and how dedicated she was to her vlogging, her audience, her fangirls. I did feel sorry for her with the whole Reese (what a prick) situation and how her precious convention time turned to something totally different. She wanted to show the world that she was over him, but doesn’t really get a chance with what is going on in this book. I loved how she stayed firm and strong though, she clearly told Reese her borders, what he shouldn’t do, and what he should do. I was worried this might end up like so many other books, her falling again for the guy. But thankfully, quite soon I could see that this book would take a different route.

Yes, this book is all about the convention, but it is also about two love stories. And I have to say that those love stories were perfect. I was squeeing, shipping, and shouting at my book that the characters should already kiss. It just took so long, and I just wanted to see those two couples get on with it already, there was so much chemistry and so many sparks flying.

The convention was also fabulous, I loved how well everything was described. I just could imagine myself at the con, walking around and having a totally fabulous time.

I also loved how Taylor, even though she was afraid, made several giant steps and leaps during the convention, and it was a delight when she found out she did all that.

Next to the convention, to the love stories, we also have our group thinking about the future. All 3 of them want to go to LA/US for university and live together. This is a big step as all of them are from Australia (well, Jamie only has lived there for a few years). I didn’t mind this part at all, if anything it made the book even more interesting to read.

I think I have said all I have wanted to say, of course there are many more elements to this book, but I don’t want to make the review too long, plus again, I am still in THE FEELS mode.

All in all, this was a book that I loved, adored, and will recommend to everyone. It is cute, fluffy, but also has lots of real stuff interwoven (Taylor and what makes her tick, bisexuality, the university/college/future stuff, about privacy).