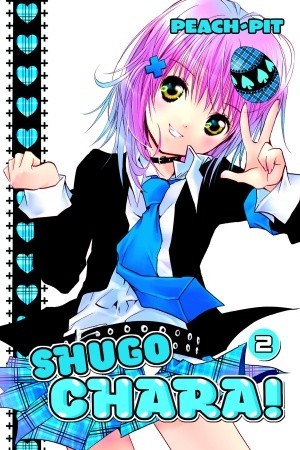 These will be short reviews for Vol.2 to Vol.5.

Volume 2: 4 stars. The excitement is going up, we have new characters (the evil teacher makes an appearance), and new transformations! I definitely loved that Amu can transform, unlike her friends who can only do a small bit of transformation. I loved Amu’s reaction to the fact she could transform, of course that is her reaction. 😛

We also have the obligatory beach chapter/episode. I have to say I didn’t like the grandpa. I found him mean. Yes, the kids came home late, but do you need to punish them like this? sighs

There are also some parts with our prince, but eh, again, I don’t ship them. I found him especially rude when he told Amu that. Come on, you don’t say that to a girl.

We find out several things near the end (though it wasn’t a surprise for me) and the volume ends on an exciting cliffhanger!

Volume 3: 4 stars. Ohhh, exciting stuff is happening in this one. Though I definitely, at least at first, disliked that teacher oh so much, but we saw another side to him, and I slowly start to like him. He deserves some happiness. While of course I think it is a bit extreme to go this way, I can see why he changed so much.

We also see more of Utau, and I was so happy to see her. She is one of my favourite characters and I want to see her more. Like Amu she can transform fully, and like Amu she has more than one egg. Plus she seems to have a bit more of a conscious than her fellow Easter peeps. She does want the embryo, but she doesn’t want to do cheap shots to get it.

I feel sorry for those that lost their eggs, it must be terrible to either lose it or break it. So I am happy that Amu may just help out with this, she can change them back/fix them. Lots of dreams will be returned to their owners.

I loved that Amu found her resolve. She really gains a lot of strength and bravery in this one. She is going to go against Easter, she is going to save those X eggs. Go Amu!

Plus add to that the fact that Amu made the same mistake she did when in the first volumes. Denying her true self. And thus her new egg… well… read for yourself. I was just pissed at Amu. You would think that after so long she would know that she shouldn’t act like this.

I hated Utau as well in this one. She is normally quite a bit nicer (though oh so tsundere), but what she did in this one was just disgusting. I thought she didn’t want to use cheap shots to get stuff? But now she is using it… sighs

But I had quite a laugh when she started doing that to Ikuto. I already knew what was going on, but it was so fun to see the Guardians’ reactions to it.

The side-story was the best part and also the reason why this one didn’t get a 1 star. I won’t spoil anything, but finally this big thing is revealed. I remember it caused a lot of confusion for Amu though. Can’t wait for her to figure/find it out.

And I hope that Amu will be honest about her new egg. And not keep it away from her friends, the Guardians, for too long.

Plus that twist about character, well then again, since I read the series and saw the series before, I knew about it, but it was still a well done twist.

Volume 5: 3.5 stars. Yay, some background on Yaya and her character egg. The first chapter was also really sweet, Yaya is a great sister, though I can imagine it may be tough at times when the parents don’t have time for her. Though that all regressed with the next chapter. Oh Yaya, no girl, no.

Yay, Amu has told everyone! I was so happy that she did it. It took quite a while, but it is finally all out in the open.

Rima also gets a lot of attention, and while I am starting to warm up to her, I am still never going to truly like her unless she starts be more true to herself. Now she is often too high and mighty and I don’t like that about her. She is much nicer and friendlier in her comedy mode.

Haha, I loved that date time with the Prince and Amu, but I loved it even more when Ikuto popped up. Hehe, Ikuto is a bit evil at times, but oh so cute!

The Ami-chapter was sweet, though I did think it was a bit irresponsible of Amu to leave her tiny sister alone in the house and go on a date.

And it all ends with another cliffhanger! Oh my! Though I would have thought the group would be a bit smarter considering everything about that CD screams Easter (the big cross, and plus you should recognise Utau’s voice by now … Come on guys, she is still working for Easter, can’t you guys see this might be a trap? Also it seems we have an extra special egg, I can’t wait for that one to get more attention!