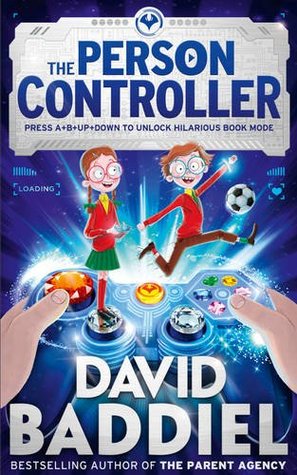 A controller that allows one to control a person? That sounds like such a delight, and I had to read the book when I spotted it at the library.

Plus add to that curiosity that I am gamer myself, so the book fitted me perfectly. I am a bit like Ellie, always quite good at games, and people at times teased me about it. Boys weren’t all to happy I could defeat them. I was definitely a big fan of Ellie, in fact I was cheering for her quite often during the events of the book. Her control over the controller was amazing, and I loved her extensive knowledge of all sorts of games. She could switch between them, from Street Fighter to Mario, to more recenter games like Minecraft like it was nothing.
But I also recognised her insecurity (which definitely wasn’t helped by the bullying). How she felt like she should change. I have to say that I didn’t quite like the change, it was just too much, she was just not Ellie any more. She was someone else, and I am not sure if she wants to be that person forever. I am glad that she could also see that, it took quite some time, but you saw that she was slowing starting to become more accepting of how she looked. (Which may also have to do with Rashid.)

Then we have Fred, I did quite like Fred, he was interesting character, and it was fun finding out what was his superpower (as I would call it that, everyone has one after all). I had a niggling suspicion on what it could be from a certain point, and was happy to see it being confirmed at the end. Plus there were all sorts of hints to it.
Like Ellie he is insecure, but not in how he looks, but with his talents. His sister is awesome at gaming and that is something he gets teased about on school. Then there is his wish to be a soccer/football player and how that fares. He feels like he has got no talent at times, and I was just cheering for him to find that hidden power.

It was fun to see the two of them cooperate and play with the controller. I loved seeing what they did, from saving a cat to fighting bullies (no, nothing really overly violent, mostly it was dodging or swinging the enemy). They really used the controller to the max.

I loved the fact our main characters were twins. I always love stories about twins, it is just so interesting to see them interact, and I loved what the twins could do in this one. That is quite a nice skill, even though it may look silly to onlookers. 😛

There are just a few questions I still have after reading the book: Who is the Mystery Man? Why did he pick Ellie and Fred? How did he know all the things he did? Where does the Mystery Man live? Is he stuck in that laptop? Or is it something else?
It was just a bit confusing. Sure, it was an interesting addition, but it feels to me as if it could be explored a bit further, now it felt like he didn’t matter that much in the long run.

Near the end (with the football/soccer match) there was a mention of characters from other book by this author. I just adore it when characters make a cameo.

There is lots of fourth wall breaking, which I just love, of course when it is well done, which is the case in this book. There are also footnotes, but they didn’t feel like too intrusive or a bother, if anything they fitted with book perfectly and even brought a smile on my face.

I didn’t like Morris and Isla, they were just a bit too much and too annoying for me. I can’t understand why the dad didn’t see anything happen, or if he did, why he didn’t do anything about it. But mostly I just wanted to have them out of the story. I hate bullies, and these really took it to the next level. 😐

Then we have the iBabies, thank heaven that they don’t have much time in the spotlight, because otherwise I would have just dropped the book. They were a pest. I can imagine that our twins would avoid them and even call them that. OK, the name was a bit mean, but I can see why the twins act like this. Then again, maybe just talk to them honestly and tell them how you feel, even if they are too young they may get it.

I am not too sure how I felt about the parents, I could see they loved their kids quite a lot, but the way they treated their kids, how they barely even noticed them was just painful, and I wanted to shake them. You got these wonderful kids, and you should care for them more. Look after them. Be there for them when they need you. And how, really how, can you not notice that your daughter is totally different from normal. sighs

The book is also covered in delightful illustrations, I am really happy there were so many of them, I really looked forward to them.

Mm, I think I have mentioned everything I wanted now, all I will say is that everyone should read this fun, hilarious book!