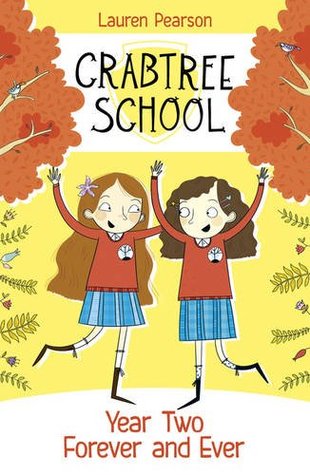 This was a hilarious first book in a series that I think will become a favourite of mine.

While it is been years since I was 11, and we don’t really leave elementary/primary school until the age of 12, plus add to that a class generally falls apart as people pick various schools instead of, what seems to be the case here, one school. I still remember the feeling. You have to start all over, you are the youngest again, there will be all sort of new things happening. Tests, exams are in your future. I can imagine that they want to stay at the school. Especially when it is a school like Crabtree. I would also want to stay there forever and ever. But on the other hand, I did find it a bit selfish of the group. You know how much you loved to move on to newer classes, and you know that people want to move on to also experience those things, yet you just stay.

So instead of being on the side of the stayers, I was on the side of the girls who wanted to move on to new classes, new adventures. I loved the plan they formed to get the stayers to leave. I loved it so much when they got everyone to participate with the plan. Not only the students, but also the teachers and other people working at the school. It was a bit overkill at times, but I was definitely happy with the plan. If talking won’t work (especially since tears can just sway the headmistress easily), if reasoning won’t work, then I guess the best plan is the one our girls thought of.

Ava is the main character and I really liked this girl. She was sweet, kind, but also brave. At times I didn’t see her as 7 years old, but a bit older. She was pretty responsible. I did love that she was a daydreamer, just like me. Picking a window seat just to watch outside and dream. Yep.

Then we have a whole cast of other characters, from Ava’s friends, to teachers, to sisters, brothers, and family. You will learn about each of them. My favourite side-character would definitely be Lottie. It is amazing that she knows so much, that she keeps track of so many things, and even went so far to hide in a mini-tree to spy on people (dedication, right there people, dedication!). I am quite interested in why she decided to keep track of everything.
Plus it was oh so funny when stuff happened at assembly and the headmistress was looking at Lottie since she always knows all the little things no one else knows. Plus it seems the teacher doesn’t even mind her running off for her missions.

I also had a laugh at Johnny (Ava’s brother) and what he did in the garden. Oh boy, poor parents. 😛

I do hope that we don’t see much more of those twins/sisters, they were really terrible, and I didn’t like how the parents reacted when x happened. 😐

What more? I think I have mentioned everything I wanted to mention. I would highly recommend this book to everyone, it is fun, hilarious, has great characters, and fun illustrations!