So a new month, and that means I can read the final 2 books in this series. So sad it is over, I feel like it could go on for a long time. 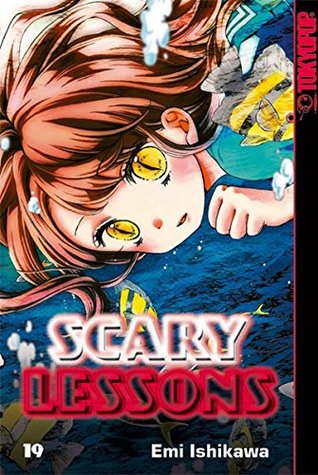 This volume was pretty awesome, it had some great stories, and one a bit less, but that was mostly due to its ending.

Hour 1: Yomi’s Hide and Seek Part 1: 5 stars. I was thinking this would be about Yomi, and in a way it is, but in another way it isn’t. The MC does meet Yomi, and she fulfils a wish, well in a way. It was quite nice that she is able to meet her sister again. I knew how this chapter would end, I have seen enough Final Destination movies. I will be quickly reading the second chapter to see how it will end. I am worried.

Hour 2: Yomi’s Hide and Seek Part 2: 5 stars. Oh, lord, I am still crying, this was absolutely fabulous, I sure didn’t expect that twist, or that ending. This was just absolutely sweet and glorious. It wasn’t really scary, not like most of the stories we have had, but still really exciting, and I found myself rooting for both of the girls. I also loved that we see Yomi in another way.

Hour 3: The Source of the Rumours: 3 stars, and only because of the ending. Da hell? What is wrong with that teacher? I didn’t see that one coming, and I was definitely not approving of it. The story itself was pretty decent, it is quite interesting to see that, no matter what manga, the girls always treat each other like crap. Ignoring each other if one has the most interest with the boys or another reason.
I did quite like the MC, especially later on when she saw the harm of rumour spreading. She saw that rumours can be fun, but can also hurt someone, really badly even. Quite often in the Scary Lesson stories the MC doesn’t learn, so I am happy to see it happen here.

Hour 4: Magic Stickers: 4.5 stars. Another quite quiet story, but creepy end. At first it was all peace and quiet, but when stuff happen, well be prepared. I had a niggling suspicion this would happen, but I didn’t expect it to be that gruesome. o.0 I quite liked the MC, and I could also quite understand why she was so angry, then again, he never claimed he was with her, nor that he was romantically interested.. Eh..

Extra Hour: The rain-lady: 4 stars. I didn’t quite like the MC in this one. She was sweet on the outside, but pretty terrible on the inside. Manipulating people left and right. The rain-lady was creepy, and well I guess our girl was so startled she did x instead of y as planned (that scene, urghh, that will haunt me). The ending was pretty cute though (yes, this sounds weird, just read it to find out why).

Can’t wait to see how they will end this series, I hope it will be done in a good way and not rushed/unfinished.