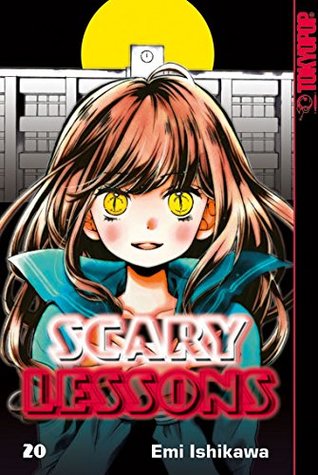 And while we get some explanation on the scary lessons and how they are around, I still feel this ending was rushed and hurried. There is so much more potential, so many more stories to tell, I didn’t even expect this series to end with this one, when I first started, and by the time I got to volume 5 I thought this one would be a super long series, with 30+ volumes. I would love to know why the series stopped. Did the author think it was time? Did wherever she published these in stop? Something else maybe?

Hour 1: The girl with the pretty face: 2 stars. Eh, I couldn’t really like it. The reveal, it was just not what I thought would happen. That just can’t happen. Nope. Plus why would 12-year olds need full on make-up to be pretty or be in? It is something I also see in the real life, but I just don’t get it. There is still all the time in the world to wear that stuff. So yeah, not my favourite story. The ending was eh.

Hour 2: The pregnant lady in red: 5 stars. OMG OMG that ending, I didn’t see that coming. This story was highly creepy, and I felt so sorry for the girl. I would have done the same as she did, run, run and more run.
Poor woman though, nobody helping her, then her being pushed, and due to her pregnancy and the very big push she died. 🙁 This time I was on the side of the vengeful ghost.

Hour 3: The country of animals: 1 stars. WTF, WTF, and WTF was up with this story, it was disturbing, not creepy, and I didn’t like it at all. So the girl made a mistake, not entirely her fault, given she was pretty much forced to do it by an adult. I also didn’t entirely get why the mom was suddenly that and why that happened? Because of something in her past? And that happens now? Whut? No, not my kind of story.

Hour 4: The city of rebirth part 1: 4 stars. This was a pretty decent story, though the ending was a bit eh. What is up with this series volumes lately, there are quite a few endings that are just eh. This one got a second part, so it continues, but while I liked the girl at first, her decision in the end was just terrible. Yes, your friend did that, but not on purpose. She was just 5 years old. 😐 She probably thought it was safe, and it was when she crossed, but cars are fast, even if it was safe one minute it may not be safe the next.

Hour 5: The city of rebirth part 2: 4.5 stars. So this is how it ends, and I definitely didn’t see that happen, but it explains a lot. Poor best friend, poor Yui, though I did love her wish. I really cried, it was so sad. OH MY GOSH at the ending though. SO that is the whole reason behind the scary lessons? How some people don’t deserve to x and then x? (And well some do, I guess, given their behaviour, then again I am still on the side that no one deserves to die.) Because of this town/city? Because of these people here?

Extra Hour. The extra hour was cute, though a bit too short for me to truly like it.

I will definitely miss this series. It was a fun ride, there were quite a few stories that I loved, characters that I will miss, and I am glad that not every story ends in death or pain. I hope to one day find another manga series like this one with horror and scary stories. Not continuous ones, but like this one, short stories.
I would highly recommend this series to everyone.