For this week I had two books I wanted to feature, but decided to do one now and the other one next week!

I just adore books with texts it makes everything even more fun to read, and at times connects two people who would otherwise never have met or spoken to each other. Like is the case with this book. I am quite curious to see how different Talon is from what people see. What kind of things does he do in his free time that no one knows. I am also really curious about the connection between these two, and what happened that makes their relationship not the easiest one to start.

Also big bonus points to the cover. I just love how the girl is hiding behind a text bubble. Add to that the colours are also pretty!

The book is coming out next week, and I am suppppper excited! 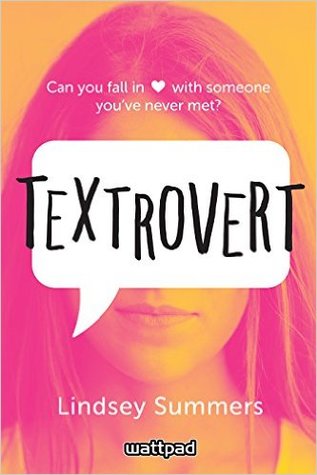 It’s bad enough when high-school senior Keeley grabs the wrong phone while leaving her small town’s end-of-summer fair. It’s even worse when she discovers that the phone she now has belongs to the obnoxious, self-centered Talon and that he’s just left for football camp … with her phone. Reluctantly, the two agree to forward messages for a week. And as Keeley gets to know Talon, she starts to like him. Keeley learns there’s more to Talon than the egocentric jock most people see. There’s more to Keeley, too. Texting Talon, she can step out of the shadow of her popular twin brother. Texting Talon, she can be the person she’s always wanted to be.
Sparks fly when the two finally meet to exchange their phones. But while Keeley has been playing a part online, Talon has been keeping a secret. He has a different connection to Keeley — one that has nothing to do with phones, and one that will make their new relationship all but impossible. Knowing what she now knows, can Keeley trust him? And can love in the present erase mistakes of the past?