Yes, it is one of my rare Waiting on Wednesday posts. Sorry for not doing these more often, it is just hard to pick one book to feature, plus I am often dead tired when I write these ones. Yes, I hear you say that I should do them earlier on the day (and not at 10pm), but eh, if I could I would. But my blog takes quite a bit of time throughout the day + I have other stuff to do during the day beside my blog too.

But this week I got one! And I potentially have selected one for next week again, unless I suddenly find a book that is even more OMG NEED than that one. But you will be seeing a new WoW next week!

For this week I got a second book in the series, I just ADORED the first one, even more so than I had hoped when I bought it. So I am really eager, and impatient, for this one to come out. I want to continue reading about Mac, about our boy band, about the touring, about record sessions, and I hope there is also some more romance between 2 certain characters hope hope. Of course I also want to know more about the copycat situation that this one will have, hope it is handled well. And I want to see what the crazy fangirls will do in this book. How crazy will it get? Plus I can’t wait for new illustrations, and new comics from Mac, I really loved those and maybe one day they can be bundled and released as a .5 book. Well, 20 more days to go, and then waiting for Amazon to deliver it. I can’t wait!!

P.S. Definitely agreeing with the last sentence in the book’s blurb. 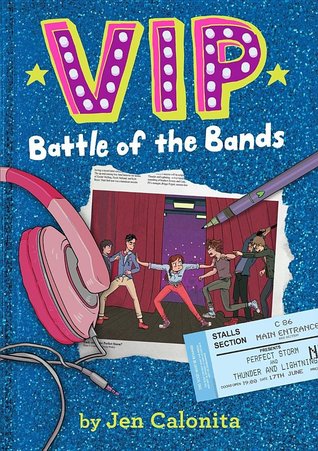 Mackenzie “Mac” Lowell is living a dream come true on tour with her favorite boy band. Spending time on the road with Perfect Storm hasn’t been what Mac expected, though-it’s even BETTER!

But with screaming fans and big-time recording sessions come haters and copycats, like Thunder and Lightning, a new band on the label whose first single sounds suspiciously like the song Perfect Storm’s guitarist wrote for Mac. As the two bands set out on a joint summer tour, more and more of Perfect Storm’s secrets are leaked to the public.

Where’s the one place all these lyrics and secrets are supposedly being kept safe? In Mac’s journal, of course! Can Mac-and her comic-book alter ego, Mac Attack-stop the leaks and nab the culprit?

With black-and-white illustrations and action-packed Mac Attack comics throughout, Jen Calonita’s VIP series is more exciting than a backstage pass!