Today the Blog Tour for John David Anderson’s newest book: Posted, is stopping by my blog!

I got an excerpt, and also a giveaway (open to everyone!). 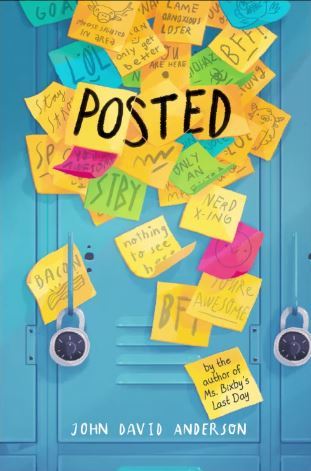 From John David Anderson, author of the acclaimed Ms. Bixby’s Last Day, comes a humorous, poignant, and original contemporary story about bullying, broken friendships, and the failures of communication between kids.

In middle school, words aren’t just words. They can be weapons. They can be gifts. The right words can win you friends or make you enemies. They can come back to haunt you. Sometimes they can change things forever.

When cell phones are banned at Branton Middle School, Frost and his friends Deedee, Wolf, and Bench come up with a new way to communicate: leaving sticky notes for each other all around the school. It catches on, and soon all the kids in school are leaving notes—though for every kind and friendly one, there is a cutting and cruel one as well.

In the middle of this, a new girl named Rose arrives at school and sits at Frost’s lunch table. Rose is not like anyone else at Branton Middle School, and it’s clear that the close circle of friends Frost has made for himself won’t easily hold another. As the sticky-note war escalates, and the pressure to choose sides mounts, Frost soon realizes that after this year, nothing will ever be the same.

John David Anderson once hit himself so hard on a dare by his sister that he literally knocked himself out of a chair and nearly blacked out. He has since translated this passion and singularity of purpose to the related arts of novel writing and pizza eating. The author of STANDARD HERO BEHAVIOR, SIDEKICKED, MINION, THE DUNGEONEERS and the soon-to-land MS. BIXBY’s LAST DAY, Anderson is a firm believer in wearing the same pair of jeans for three days in a row (four in the winter) and the power of writing to solve 73% of the world’s problems. He lives with his beautiful wife and twins in Indianapolis, Indiana.

Nudging is a fact of middle school life. It’s inevitable, like puberty and armpit stink and lame assemblies. You just learn to live with it. It’s better than getting tripped and probably a heckuva lot better than getting hit. I wouldn’t know about that—I have never gotten in a fight—but I’d been nudged a dozen times, maybe more. Some of them were by accident, other kids honestly not looking where they were going. Most of them weren’t.

Some kids can see it coming. You can track the shift in trajectory, the other kid working the angle to guarantee impact. Sometimes they even smile at their friends before it happens. A premeditated shoulder slam. It’s not a big deal. It’s not like you’ve been shoved into a locker or had your head stuffed into the john IT’s marking territory. Good fences make good neighbors. You just pick up your books and move along. It’s not something you tell your parents about. It doesn’t bear a remark of any kind. It was just an accident. That’s what you tell yourself.

Sometimes they mock-apologize, the girls more than the boys. Make a big production out of it—“Oh, I’m soooo sorry. Did you get in my way?” That was the real insult. They made it your fault for getting nudged. Your fault for being invisible, for not stepping aside.